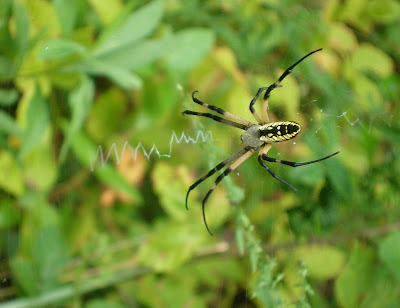 One of Kentucky's largest spiders is Argiope aurantia, variously known as the Garden Spider, Corn Spider, Writing Spider and Black & Yellow Orb Weaver. I snapped this photo of a juicy specimen with its trademark zig-zag stitch web in the William F. Miles Park, on the Eastern edge of Jefferson County. Despite their fearsome appearance, they're generally regarded as harmless to humans.
Posted by JSH at 12:00 AM

We are new to Kentucky and our first sighting of one of these was in our study window. Creepy looking! But beautiful. She was spinning her web between the screen and storm window, so we could see her quite well. Very cool.