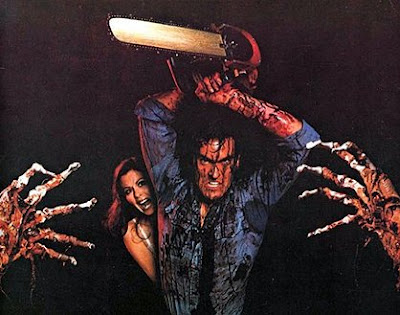 If you're a Sam Raimi fan - and who isn't? - you probably already know that the stage musical version of his film The Evil Dead is a-comin' to Louisville.

The first musical version of the film was staged in Canada in 2004, then the Off-Broadway production ran from 2006 to 2008. Songs include "All the Men in my Life Keep Getting Killed by Candarian Demons", "What The F%@# Was That?" and "Do the Necronomicon".

Like a Gwar show or a KISS concert, the first two rows of the theater are designated "the Splatter Zone" where no responsibility is taken if you get drenched in fake blood.

They have a website, but I found it completely unusable since it's a seemingly neverending series of lame flash animations that contain no useful information. Finally, when I managed to manuever it to a page that contained links to info about the show, I clicked the one that said "buy tickets" and nothing happened. Why on Earth do people allow their webmasters to design websites that force people to wade through cheesy flash intros to get to the part that actually sells the product? Even clicking "skip intro" didn't really get me to any hard data about the show. I guess I don't have the latest up-to-date Mark of the Beast of Shockwave or whatever other crap it needs to function properly.

I would love to go see that!!!