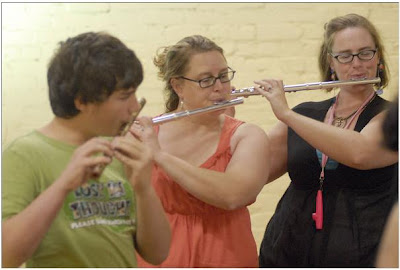 Way back in the good ol' 20th century - 1998, to be exact - I formed a crappy avant-garde Dixieland Jug Band whose reputation for unabashed ineptitude echoed through the foothills of the Appalachias. Each week at the now-defunct Cardinal Deli in Berea, Holland's Jug Stompers randomly enlisted musicians without auditioning them, handed instruments to them which they had little or no expertise in playing, and launched into atonal sets without rehearsing. The players weren't even provided with a set list - usually I would just turn to them and announce, "Okay, now we're going to do Louis Prima's 'Banana Split for my Baby'", and watch their expressions of horror and confusion.

In that spirit of fondness for low-budget raw-talent lease-breaking Creeps Music, it does my heart good to see these young whippersnappers in Lexington keeping that low gruesome sound alive with their March Madness Marching Band, which takes the whole "brass band that can't play and doesn't care" concept to even greater heights of depths.

As my old pal Mary Meehan said in the Herald-Leader, "Enthusiasm trumps musicianship". That pretty much sums it up. She goes on to say:

But that's part of the beauty of the whole thing, said saxophone player Steve Baron, who also is the owner of Lexington's CD Central.

"I literally haven't picked up an instrument in 40 years," he said. "No one is going to mistake us for a highly polished group of musicians."

But the motley crew is filled with people with pretty serious day jobs: lawyers, engineers, teachers and small business owners, said Jennifer Miller, who has dubbed herself the cruise director and says she plays the camera in the marching band. During the week, she's a lawyer.

"It's nice to have two hours in a week where you kind of have fun like when you were a kid," [chief organizer Lori] Houlihan said. "It's completely about the joy of doing it." 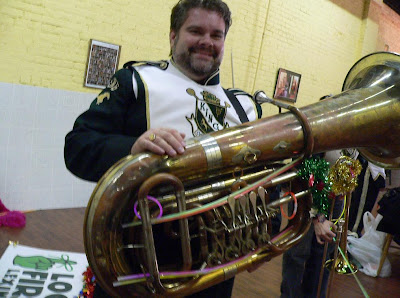 Thank you so much for the great post! That is Derek Wingfield in the photo there. Some have said that it is he, who is the glue, that holds the MMMB together.

Thank you for the props!
More Sousaphone!!!!

Nice Article! There's so many wonderful people in this band and such a sense of community.