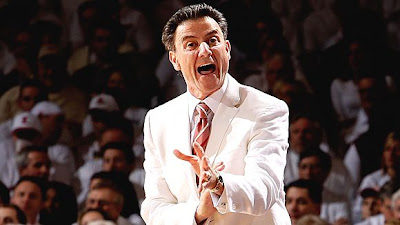 Words truly can't express just how little interest I have in modern commercial sports. And when it comes to basketball in particular, I not only don't care about it, I actively harbor some antipathy towards it.

So it would take something pretty wacky to get me to write about Kentucky basketball on here - maybe like if Kyle Macy got a sex change operation, John Calipari was abducted by aliens (if only!), or if Rajan Rondo was proclaimed to be the 974th Living Eck Master.

Well, something almost that weird happened. For those of you who haven't already heard the details too many times to count:

Rick Pitino had sex with a woman in a restaurant - in a restaurant - subsequently gave her three grand for an abortion (even though no proof was offered that the baby was his), then had a secret meeting with her at the apartment of the team’s equipment manager, who would subsequently marry the woman and then divorce her.

Got that so far? Okay. Then:

The woman attempts to shake Pitino down for her silence on the matter for ten million dollars, new cars, and a house. Pitino decides being blackmailed is not such a good idea, and calls the cops on the extortionist instead. (I can imagine her stunned and stammering "w-w-what?? that wasn't supposed to happen!") Flailing in desperation, she tells police that Pitino had actually raped her on not one, but two occasions. Pitino maintains the sex was consensual.

In other words, it's your typical southern trailer-park feud drama, just played out in Brooks Brothers suits and bad Derby hats instead of NASCAR sleeveless t-shirts and Daisy Dukes. 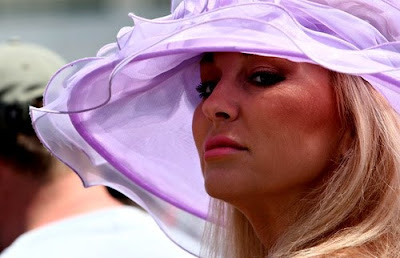 Strangely, some members of the public are holding Pitino up to greater scorn than Sypher, which is puzzling to me. Pitino has led a very successful and productive life in many, many fields besides sports, and to turn on him over a dalliance that occurred years ago and isn't anyone's business anyway, well, that's just petty. Rick Pitino is still a role model and a hero.
Posted by JSH at 12:15 AM

I would have sex with her in a restaurant. If she's ever in Richmond and lonely tell her to give me a call.

But, Mr. Ed, if you see anything you haven't seen before, please, get a stick and kill it!

I was somewhat amazed to hear the couple started coupling before Porcino's closed; the Manager tossed Pitino the keys and asked that he lock up. Perhaps only in Kentucky could one get that kind of service! :-)