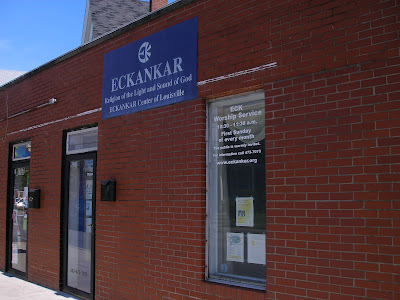 The Eckankar religion has a considerable presence in Kentucky, and why not? Their founder, Paul Twitchell, was a Kentuckian.

Twitchell was born in Paducah in 1909, and went on to attend Western Kentucky University in Bowling Green and Murray State University. He dropped out of both colleges each time.

After returning from a stint in the Navy during World War II, he began dabbling in mysticism, Eastern religion, and New Age belief systems. He followed Swami Premananda for a time, then Scientology, then Kirpal Singh.

In 1965 he announced that he had been chosen by an ancient society of holy masters, to become the new leader of the formerly secret religion known as "Eckankar" to the world. He claimed a 500-year-old man (who supposedly still lives to this day) named Rebazar Tarzs visited him regularly in his apartment to guide him in his writings. According to Wikipedia:

Rebazar Tarzs presently resides in the Hindu Kush mountains, and is "the emissary of ECKANKAR in the physical universe". There are several essays by ECKANKAR followers who report having met him, including one who describes Rebazar Tarzs's guiding him to herbs that cured his heart condition, and one who tells of receiving a gift from Rebazar Tarzs during the Korean War, the gift later being traded for desperately needed food.

Twitchell claimed that past members of the secret ECK society included Plato, Pythagoras, and St. Francis of Assisi. He also made some pretty lousy predictions, such as that the Vietnam War would end in 1968, and that Lyndon Johnson would be elected US President for a second time.

So what exactly do Eckists (followers of Eckankar) believe? Their website says this:

"Eckankar teaches that there is an audible life current known as the ECK, or Holy Spirit, that connects each of us with the heart of God. We can experience the ECK as Light and Sound. Through study and practice of the Spiritual Exercises of ECK, we learn to recognize the Light and Sound of God as It touches our lives and brings increased divine love."

They also believe in the power of HU, which is a Sufi vocal ritual considered by Eckists to be "a love song to God". Reincarnation and astral travel are also important parts of the religion. 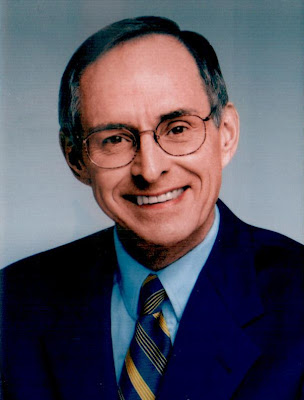 Twitchell died in 1971, which also dashed another of his predictions; he said he would live into the 1980s. Currently Eckankar is headed by one Harold Klemp (pictured above), who attended Indiana University and was connected to military intelligence before joining the ECK movement while in Japan. Klemp is regarded to be "the 973rd Living Eck Master" in an unbroken line that goes back to the dawn of human life.
Posted by JSH at 12:34 AM