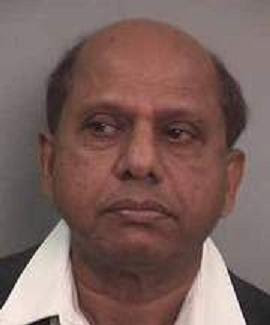 Back in February a Tennessee doctor named Visuvalingam Vilvarajah was arrested in Harlan County, KY on charges of engaging in organized crime, assault and wanton endangerment. According to the indictment, Vilvarajah provided prescriptions for large quantities of drugs knowing they weren't for patients' personal use.

During the course of the narcotics and organized crime investigation, the Harlan County sheriff found that at least 350 people in the area carried prescriptions from Vilvarajah and his partner. These drugs included several types of painkillers, including OxyContin and methadone.

But that's not the weird part. Sadly, that sort of thing is rampant these days.

The weird part is, after being taken into custody, the Kentucky police realized that Vilvarajah had previously been convicted in 1986 on two charges of second-degree murder. According to news reports, he learned his wife was about to leave him and shot her and her mother in the head.

The even weirder part is that he only served five years for second-degree double murder, and that his medical license was fully reinstated. (If I ever kill someone, remind me to do it in Tennessee.)

Vilvarajah faces up to 75 years in prison if convicted.
Posted by JSH at 9:11 AM

I could care less about the drugs.