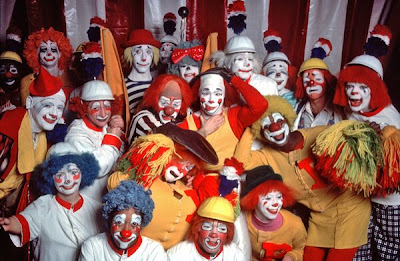 I just found out that this very week, Louisville is hosting "Run For The Noses", the 2009 Convention for Clowns of America International.

Those of you who follow my artistic escapades know that I have a real love/hate obsession with Clowns. Mostly hate. In 2005 I had a one-man exhibition called Clowns in Love in New York City (with a special guest appearance by Kentucky's very own Grillo the Clown).

I've always felt that the guy in the film Killer Klowns From Outer Space was on to something when he theorized that our Clowns of today represent a distant vestigial memory of the frightening ancient alien civilizations that seeded our solar system in prehistory.

Nevertheless, your humble author is always willing to take one for the team, au service de la révolution, and I looked into the possibility of donning some clown white facepaint, making a balloon Cthulhu, and infiltrating the Clown Convention for this blog as an investigative reporter. Unfortunately, with a $185 registration fee, that would have been a pricey scheme.

Considering that all Clowns on Earth know each other and recognize each other immediately, I'd be outed in no time. And I don't know the secret Clown handshake, nor the Clown "password for the house". If captured by Clowns and grilled about my Clown credentials, I'd collapse under questioning faster than Peter Graves in Stalag 17.

But, if you're a braver soul than I and have $185 to blow, check it out and let me know what you learn. Some of the fascinating experiences you may expect:

I have always thought clowns were incredibly creepy.