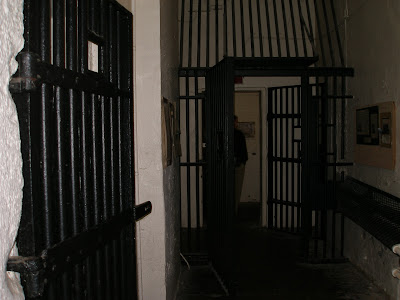 The Jailer's Inn, located at 111 W. Stephen Foster Avenue in Bardstown, is a bed and breakfast occupying the former Nelson County Jail building. Originally built in 1819, the building is still pretty much unchanged today, except that most of its rooms have been renovated into luxurious suites.

However, some cells have been left intact for historical display purposes, and one of the rooms available for rent still has a decidedly spartan cell-like quality to it (albeit done up with an Elvis/50s motif!) 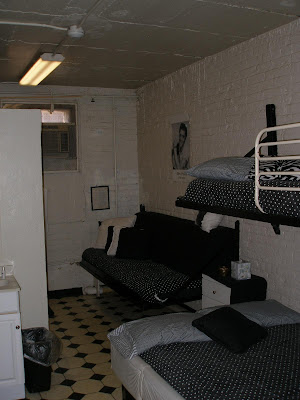 The Jailer's Inn, like the Talbott Tavern next door (see page 194 in your copy of Weird Kentucky), is often reported as being haunted. The Travel Channel even named the Jailer's Inn on a list of the ten most haunted places in America, although I wouldn't go that far.

I haven't experienced anything creepy at Jailer's Inn myself, but certainly, it would make sense that it would be a potentially haunted place; after all, old jails would be a place of accumulated human misery and even death, just like old hospitals and asylums.

Of course, this isn't necessarily the kind of PR that every bed and breakfast wants, and so there's no mention of any hauntings on their promotional brochure. But they do take part in so-called "ghost hunter" events such as Patti Starr's "Ghost Hunting Get-a-way Weekend", which charges 500 bucks for a double-occupancy room, dinner and breakfast, a ghost-hunting seminar with Patti, and tours of Jailer's Inn and Talbott Tavern. If this sort of thing is your cup of tea, you can find more info here.
Posted by JSH at 9:19 AM

Ha, the Elvis cell...kind of reminds me of my dorm room. Minus the Elvis motif. :-/

I stayed there last Halloween weekend and didn't experience anything either. I did the ghost tour that night as well. Did you see the little white cat running around the Inn? I got a creepy pic of it. I believe the room is a James Dean motif is it not?

I went to Patti's ghost hunting class last year about this time but I haven't gone back to finish and get my certificate.

I stayed in the jail cell room with some fishing buddies of mine and heard the most aweful crying in the hallway around 2AM. It was so hidious we were afraid to open the door to look. Im not saying it was a ghost but it sure creeped me out!