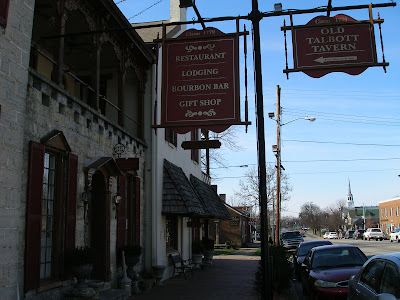 The Talbott Tavern (right next door to the Jailer's Inn) in Bardstown is the oldest "stagecoach stop" tavern and hotel in the United States, built in 1779.

Although Jesse James’ ghost is claimed by some to walk these halls, I see no reason to believe that he should haunt a tavern just because he used to drink here. Ghostly activity predates his death, with numerous child ghosts said to be creeping around, plus the spirit of a waitress who committed suicide here by hanging herself.

By some accounts, Jesse James may have had a paranormal experience himself at the tavern: one night while sitting around drinking, he claimed that he saw the murals painted on the walls of an upstairs room coming to life, and shot the walls full of holes in his panic.

Then again, it may have just been the fact that he was three sheets to the wind. And maybe hallucinating on a bad batch of bourbon. Other accounts say he was merely shooting at a butterfly, either real or imagined. 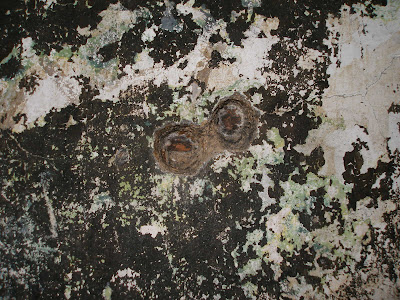 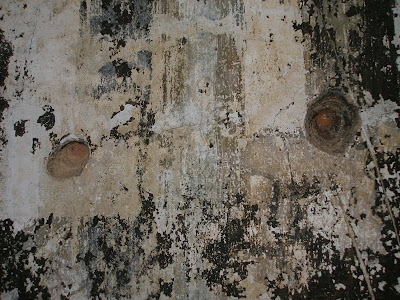 The bullethole-riddled mural has always been a point of historical pride for the Tavern, but sadly was destroyed in a fire. It has been speculated that the fire was of supernatural origin as well.

The room was still in a charred shambles when I dropped in to take photos for the book, but they graciously allowed me to go in the locked room and snap a few shots of what was left.

The bullet holes don't all seem to follow the same trajectory, which I suppose could be explained if James ran all around the room when he did the shooting. I suppose.
Posted by JSH at 9:46 AM