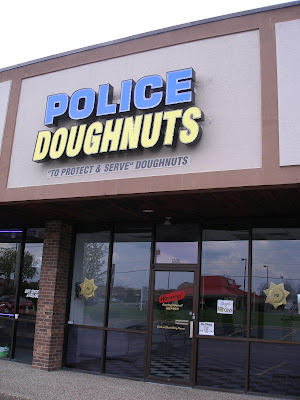 This is possibly the weirdest donut shop I've ever set foot in.

First of all is the concept. Police Doughnuts. At first I wasn't sure if this meant donuts for policemen, donuts made by policemen, or both, or neither. A huge police van stays parked out front bearing their insignia, and though it's not as hip as the Spinelli's van, I salute their wackiness.

Then there's the hours. The place opens at 7am, they make just one batch of donuts, and they close whenever they sell out. Either they're doing a terrific business already or they just aren't making many donuts to start with, because I've been out there as early as 9:30am and found them closed.

(But...but... the whole reason cops are associated with donuts in the first place is because Krispy Kreme-type places and convenience stores have historically always been open late, and thus popular with third-shift patrolmen. So, shouldn't Police Doughnuts be open all night instead of just an hour of frenzied trading at the crack of dawn?)

And then when you walk into the place, you notice that 5/6 of the place is empty. No tables or chairs. Nothing. You walk toward the back to a cash register and a dry-erase-marker sign listing only three or four types of donuts for sale (Today it was Glazed, Chocolate, Blueberry and Maple.) There are no sugar-free, gluten-free, or "light" options, and a sign on the door says "Warning! Counting calories? Keep Out!" I love it. It's the total opposite of my other favorite Kentucky donuteria, Doughdaddy's, which offers you a staggering amount of choices.

There is no glass display case. No donuts are actually seen in the store. You read the short list, make your decision, tell the cashier, and she disappears into the back to fetch your donuts. It's all rather bizarre.

All that matters in the end, though, is the product: is it any good? Oh yeah. Oh hell yeah. I'm addicted to their maple donut and hope they gradually branch out into more flavors as their business grows. 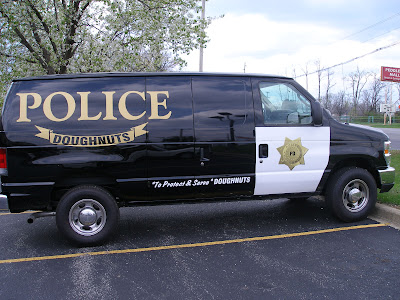 As it turns out, the store is the brainchild of Ken Borders, a former State Trooper and arson detective who opened it just a few weeks ago. Although he had never been in the restaurant or bakery business before and knew nothing about it, he saw a Food Network program about doughnuts and decided to jump into it. Now that's the true American entrepreneurial spirit that I like to see!

Go to Police Doughnuts. Go early. It's near the corner of Shelbyville Road and Juneau Drive in Middletown. Tell 'em I sent you by!
Posted by JSH at 12:01 AM

Sounds like it would be a booming business in Liberty City.

That sounds wicked cool. I might have to take a road trip to go see it.

This is an old review. Now (July 2011) there are cases where you can see the donuts, and there is a good variety.. the red velvet cake is one of my favorites. And yes, very delicious. The texture, i just cant find that anywhere else.