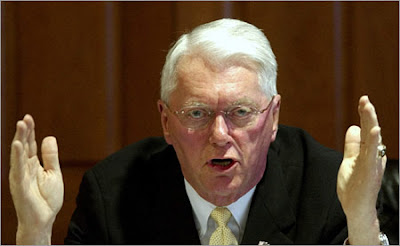 I'm going to miss Jim Bunning. After a long and distinguished career in Kentucky politics, he recently announced that he will not seek Congressional re-election in 2010, thus ending one of the weirdest political careers in memory.

Bunning, who was born and raised in Southgate, KY, had a quite respectable career in pro Baseball, pitching for the Tigers, Phillies, Pirates and Dodgers between 1955 and 1971. He ended up in the Baseball Hall of Fame with a Win-Loss Record of 224-184, an Earned Run Average of 3.27, and 2,855 strikeouts. Might have been for the best if he'd retired on his sports glories. 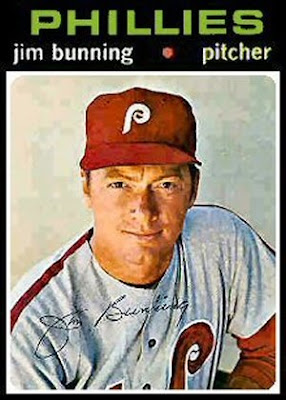 National Journal voted him the second most conversative Congressman, second only to Jim DeMint, the guy who stated that single mothers who live with their boyfriends shouldn't be allowed to work in the education system.

Bunning was always more than a little peculiar, but in recent years he's grown more and more loopy, to the point that his own party is increasingly wary of him. As Mary Jacoby wrote in Salon just before the 2004 election:

It's no secret in Kentucky that Sen. Jim Bunning, a Republican who was expected to coast to reelection on Nov. 2, has been acting strange. Over the past few months, Bunning has angrily pushed away reporters, exchanged testy words with a questioner at a Rotary Club and stuck to brief, heavily scripted remarks at campaign events, delivered in a halting monotone. The former major league baseball star now travels the Bluegrass State with a special police escort, at taxpayer expense. His explanation? Al-Qaida may be out to get him.

During that same campaign, Bunning described his Democratic opponent Daniel Mongiardo as looking "like one of Saddam Hussein's sons." At first Bunning denied having made the statement and admitted it only after it was made clear to him that he had said it on tape. Even then, he only made an apology for his remarks after considerable public pressure. 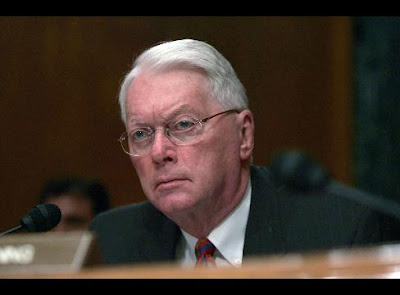 In February 2009, at a dinner for the Hardin County Republican Party, Bunning predicted that Supreme Court Justice Ruth Bader Ginsburg would probably die within nine months. Bunning later sent out a press release apology. (The press release misspelled the Justice's last name not once, but twice.)

In an April 2009 poll, Bunning’s approval rating was at an all-time low of 28 percent, but he vowed to run for another term. Amid rumors that Senate Minority Leader Mitch McConnell was not pleased at that prospect, Bunning lashed out in a series of irrational rants to reporters.

Despite previous assurances that he was in the race, Bunning has finally bowed out and will retire in 2010. However, even in his announcement of such, he couldn't help but let his conspiratorially cranky side out again:

"Over the past year, some of the leaders of the Republican Party in the Senate have done everything in their power to dry up my fundraising," Bunning said in a statement. "The simple fact is that I have not raised the funds necessary to run an effective campaign for the U.S. Senate. For this reason, I will not be a candidate for re-election in 2010."

i cannot believe he was reelected after all the scary things he did and said. the people have been thorougly hoodwinked by propoganda.