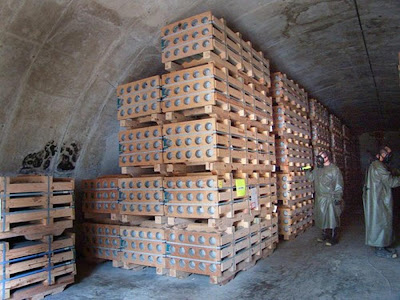 The Los Angeles Times has a new and extensive article on the rapidly corroding nerve gas cannisters at Blue Grass Army Depot in Richmond. In addition to the chemical dump, the BGAD is also home to alleged UFO technology, spooky Raytheon projects, and the occasional black helicopter. Choice excerpts:

Behind armed guards in bulletproof booths deep in the Kentucky woods, workers have begun pouring the foundations for a $3-billion complex designed to destroy America's last stockpile of deadly chemical weapons.

The Obama administration has pushed to speed up the disposal operation after decades of delay, skyrocketing costs and daunting technical problems. The arms must be destroyed by April 2012 under international treaty and by December 2017 under federal law. But the Pentagon notified Congress in May that, even under what it called an accelerated schedule, it would not finish the job until 2021...

"We do experience leakers from time to time at very, very low levels," said Lt. Col. David Musgrave, commander of the Blue Grass Chemical Activity, as the storage site is called. He said no toxic plumes have escaped the igloos or threatened the surrounding community...

Concerns about safety at Blue Grass were highlighted last month when lawyers for Donald Van Winkle, a former chemical weapons monitor who claims he was forced out of his job at the facility after he uncovered unsafe conditions, obtained an Army investigative report through the Freedom of Information Act...

Another self-described whistle-blower, Kim Schafermeyer, 59, alleged he was fired as a chemist in 2006 in retaliation for citing safety and pollution problems at Blue Grass. A judge dismissed his lawsuit last year on a technicality.

Schafermeyer contends that the aging munitions are decomposing faster than officials admit. "They are highly unstable," he said. "These things should be destroyed next week."

Read the article in full here.

By the way, in the above photo, note that the BGAD igloo workers have gas masks strapped to their faces but their rest of the flesh on their heads remains exposed to the open air. But nerve gas is readily absorbed through the skin with even the slightest contact, so, uh, WTF?
Posted by JSH at 12:11 AM

They sure dont seem concerned do they? Maybe they know something we dont. Maybe the containers are empty. If they already moved all the sarin to some other storage place and now are getting paid millions to destroy sarin that isnt there, who would know?