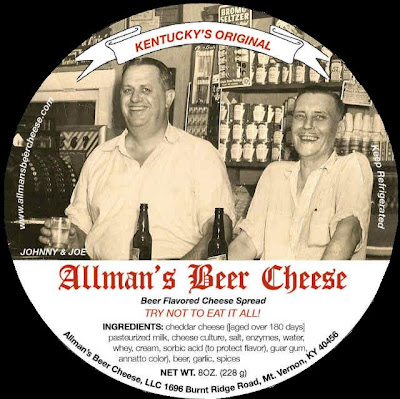 Beer cheese lovers and Boonesboro historians rejoice! The ghost of the birthplace of beer cheese, Johnny Allman's Restaurant, comes back to haunt the 21st century, thanks to Johnny's grandson Ian and the original formula for Johnny's historic beer cheese.

That's right, you heard right, Allman's Beer Cheese is back! According to their website:

Johnny Allman began his historical restaurant career in the late 1930's on the banks of the Kentucky river near Boonesborough. After retiring as a captain in the Kentucky Highway Patrol (and personal aid to two Kentucky governors) , he opened his first restaurant, The Driftwood Inn. It was here that Johnny and his cousin Joe developed the first batch of beer cheese ever made.

Johnny moved his site of operation to the site of present day Hall's Restaurant in the early 1940's and after a while sold the business to Carl Johnson. Upon the sale, he agreed to stay out of the restaurant business on the river for five years. During this time away from the river he opened The Smokehouse on US 25 in Madison county near the Blue Grass Army Depot during the Korean War. After that location he moved to North Broadway in Lexington to open an Allman's Restaurant during the construction of IBM. He again sold that restaurant and moved for the last time back to the Kentucky river and built on a site located between his two previous locations. Johnny ran this last Allman's Restaurant until 1978 when the business burned and he retired. The last genuine Allman's beer cheese was served at this location.

In the past thirty-odd years many versions of beer cheese have popped up on store shelves and on the tables of regional restaurants. But now, "the beer cheese that started it all" is available again in its original unaltered recipe made by Johnny's grandson Ian Allman. Thirty years hasn't changed a thing. Allman's Beer Cheese is owned and operated by Ian Allman and his wife Angie who reside in Rockcastle County.

This is a brand-new product launch, so distribution is just getting started. Right now it's only available at Better Beef on Chestnut St. in Berea, but I expect that's all about to change shortly. I haven't tried it yet, but am eager to get my hands of a tub of it and will no doubt be raving about it here soon.
Posted by JSH at 12:22 AM