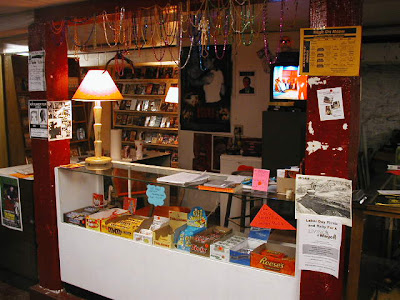 I've always been fascinated with the fundamental mechanics of stores, businesses and trades, and the veil of mystery that shrouds their true nature to the average citizen. This veil of mystery increases proportionally as one goes from a more rural area to an more urban one. When a man in a big city wants to start a business, he does market research, seeks investors for startup capital, studies locations, etc. in a process that sometimes takes years before actually opening the damn thing. But when a man in a rural area wants to open a business, he basically just hangs out his shingle and declares himself open for business, simple as that, done deal. I like that.

Although misinterpreted by metropolitan eggheads as a work of fiction, the Beverly Hillbillies TV program reveals the true face of Southern entrepreneurship. When Jethro wakes up one morning and decides he wants to be a fry cook, he immediately sets out to make it so - before the sun sets that day. And when he decides two weeks later that he's tired of that and wants to be a movie producer or a double-naught spy, he just does it. When Granny decides one morning to open a dental office in Mr.Drysdale's building, she simply paints a sign that says "Granny's Dentist Office" and voila, it's done, with precisely the same sort of occult magic worked by the Federal Reserve when it declares the intrinsic value of the American dollar merely on their say-so.

That these enterprises aren't necessarily "successful" in a linear financial sense is not the point. The Medium is indeed the Message, and the reward is indeed the trip, not the destination. (And even with its "business as performance art" mentality, my store still turned a profit. Suck on that, John Maynard Keynes.) 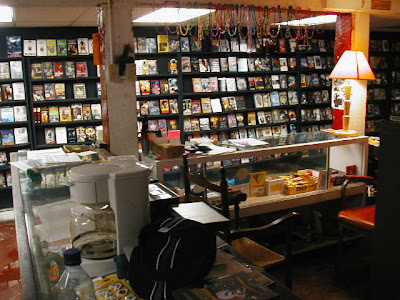 It was with that in mind that I envisioned Voodoo Video in late 2002. It opened in the dirty, moldy downstairs of the Sqecial Media building in Lexington in January 2003, and as with practically everything I've ever done in my life, it was done with very little forethought, planning, or preparation. Like my paintings, it was all about immediacy, action, results. "This is a video store because I say it is so shut up". 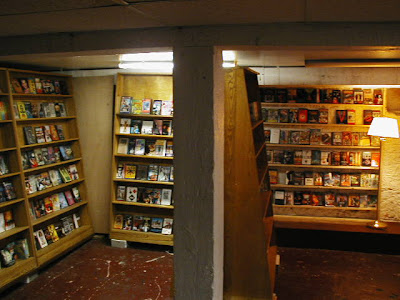 Shelves were hastily slapped together from the cheapest lumber available at Lowe's, and a small fortune was spent on hastily stocking the place with the weirdest possible uncommercial movies: obscure art films, low-budget amateur porn, shoddy indie productions donated by friends, grade-Z horror flicks, foreign films with and without subtitles (some without boxes, even), and the most obscure selections from the Something Weird catalog. We even put out for rental "found" VHS tapes from yard sales and Salvation Army stores, containing the family reunions of unknown persons and shows they taped off the TV twenty years ago. Also an old Burger King employee training video, and a 1984 videotape of a hotel lobby where someone left a static video camera turned on for almost two hours for seemingly no reason. 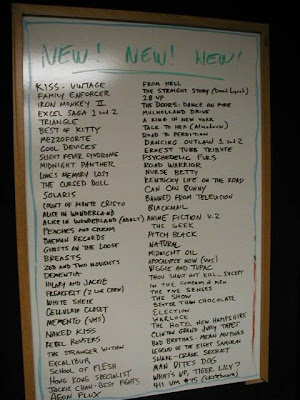 Many bands performed after-hours in the moist subterranean cellar, with concrete walls and flooring plus shelving of video boxes providing truly squidgy and unorthodox acoustics for performances. Among the bands that graced the store's floor were hardcore punk band Cadaver In Drag, trippy experimental combo Lemonmoonhome, and the interplanetary transgendered garage band The Crunchies (see image below). 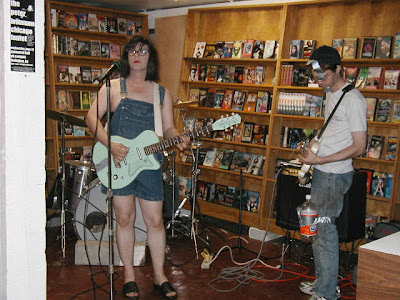 We also started the "Voodoo Video Cheesecake Girls", a feature on our website in which we encouraged female customers (and sometimes employees) to pose nude, near-nude, or just plain sexily right there in the store. This lowbrow exercise in art photography was short-lived but extremely popular. A late-night "after hours" invitation-only burlesque show held there was also a success, and showed promise for bigger and crazier things to come, had the store stayed in business. This was the embryonic beginning of the Voraxium series of shows.

Needless to say, however, all this public nudity and punk rock didn't sit well with the religious coffeehouse that moved in upstairs towards the end of Voodoo Video's lifespan. The coffee house, its obnoxious owner, and his frightening zombie-like teenage lackeys made the entire building an insufferable place to be with their constant complaints. They held disruptive "Christian Rave" events and fire-and-brimstone preaching on the sidewalk out front, using Jed Smock-style tactics of insulting passersby and yelling at them that they're all going to Hell. These events were broadcast at ear-splitting wind-tunnel volume with a huge and expensive sound system. Fortunately, the switchbox for power to the entire building was in the basement, in my store. I'm not ashamed to say I took special glee in pulling that switch on them more than once.

After almost a year of Voodoo Video, I was ready to move on, though. What had been conceived as an extremely elaborate installation/prank had quickly morphed into a very real and functioning alternative video rental store, and I don't have the patience to actually become a shopkeeper. I wasn't painting as much as I should (my only major show that year was Desperate Telegrams at the Gallerie Soleil) and I was being pulled in other directions by my photography work and paralegal duties. So, at the apex of the store's greatness, I baffled everyone by putting a gun to the store's head and calling it quits. It was fun while it lasted, but I had bigger fish to fry.
Posted by JSH at 12:00 AM

Dirty, moldy basement? Yeah, that rings true. What about the four furnaces?! And the darkroom?! Were they still there?

I have to go see this place if I ever get back to Lexington.

Brief but legendary. I still regale and confuse my friends with stories about Voodoo Video and its greatness. This is a compliment: I always laughed when I headed downtown and the store was closed with "Gone to Gallery Hop" or something pasted on the door. It was like you had to be LUCKY to get into Voodoo Video.

Lets bring the Voodoo to town!