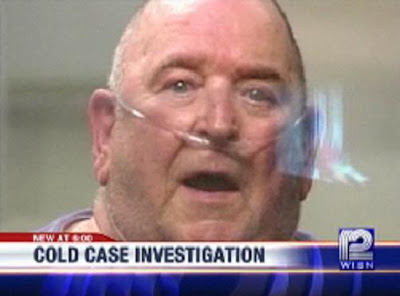 Sheriff Dan McClelland of Geauga County, OH, has announced his intention to further question Edward Wayne Edwards regarding the 1997 death of one Dannie Boy Edwards. His dead body was found near the Cleveland-area home that he and Edward shared in 1997.

And exactly was kind of relationship was that?

Well, Dannie Boy Edwards, 25, was actually named Dannie Law Gloeckner. At some point while he and Edward were living together, he legally changed his last name to take on Edward's surname and, most curiously, to change his middle name to "Boy". According to WISN-TV:

Ohio investigators watched news of Edwards' arrest and recognized the man. He had left town in 1997, shortly after the homicide of a young man he'd treated like a son.

"There was an attempt to take the young man in. He became very close to the family. They talked about adopting but that was not allowed, and the victim changed his given name to Edwards' last name," Geauga County, Ohio Sheriff's Department Sgt. Brian Johnston said.

Shortly after Dannie Boy Gloeckner changed his name to Dannie Boy Edwards, he was found dead from a shotgun wound to the head.

And that's not the only new corpse to come out of the woodwork since Ed was nabbed for the murders of Kelly Drew and Tim Hack. From WISN again:

Last month, Hack's father suggested there might be other victims.

"He's going to be connected with something else along the same lines. He was a no good," Hack said.

Edwards was an early suspect in that case, and made the FBI's most wanted list when he escaped from jail while awaiting questioning on the case.

That pair of Portland young lovers would be Larry Peyton and Beverly Ann Warren. Peyton's body was found with multiple stab wounds in a park in November 1960 and his girlfriend Beverly's turned up two months later, hidden in another location and also stabbed to death.

Edwards was being held for questioning regarding those murders, but he escaped from jail. This is the incident he was referring to in his book Metamorphosis of a Criminal. What I can't figure out is how he continued to go on about his life, still using his unusual real name, and openly bragging about the incident in a book and a spoken-word record album, without anyone tracking him down. Ed wasn't just hiding in plain sight, he wasn't even hiding.

And something tells me we've still just scraped the top of the bloody iceberg in the crazy world of Edward Edwards...
Posted by JSH at 11:47 AM