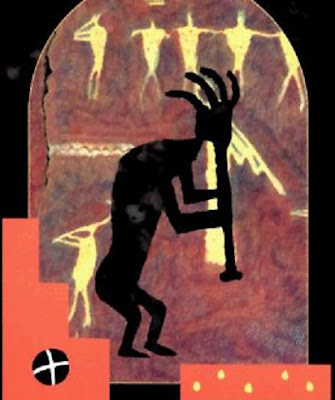 Your parents might not have ever heard of Kokopelli, but there's a good chance that you have. In recent years, the ancient Southwestern Native American symbol of Kokopelli has become trendy and hip, leading to greater awareness of this mysterious trickster music/agriculture/fertility deity. The first known images of Kokopelli appear on Hohokam pottery circa 750 A.D. and reportedly, the tradition goes back even further to the Ancient Pueblos, circa 1200 years B.C.

Kokopelli petroglyphs (see image above) usually depict him as a slightly hunchbacked humanoid figure (though some theorize he's actually intended to be a cartoonishly anthropomorphized insect) holding a sticklike object up to his face. Because music is among Kokopelli's realms of overseeing, the object is generally regarded to be a flute. Some say it may have originally been a blowgun but gradually gave way to a more peaceful, musical symbol. Still others contend it's actually a pipe for ceremonial smoking of tobacco and herbs.

Images of Kokopelli are ubiquitously found in the Southwestern states, and I've always wondered why his influence never spread to other parts of North America to states like, well, you-know-where.

But it just may be that the power of the Kokopelli myth did indeed make it to Kentucky in antiquity. I submit to you pages 24-26 of Rock Art of Kentucky, the ultimate compendium of prehistoric petroglyphs of our commonwealth. There you'll find information about the Reedyville Petroglyph (see image below). Located in Butler County, southeast of Reedyville, near the old Honaker's Ferry, this set of petroglyphs reside on a slab of Pennsylvanian sandstone known as "the Caseyville Formation". They show what clearly seem, to me, to be a Kokopelli-ish figure, hunched forward with protrusions from his head and holding something up to his face. A more primitive one is just inches away, with a head of "hair" that even more resembles Kokopelli, but is limbless and tree-trunk-like. Most importantly, look at the legs and feet and how they relate to the torso. 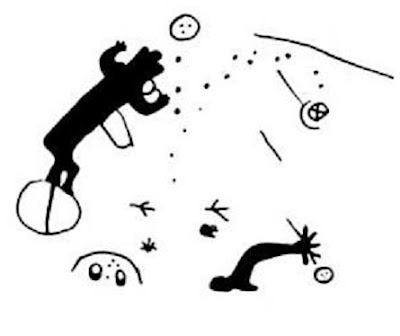 The sketch in Rock Art of Kentucky is just one person's attempt to draw what he saw there, of course. Unfortunately the photo in the book is a terrible one and shows very little. These glyphs lay flat, open to the elements, and were almost certainly much more detailed when they were new. Many details that would aid in analysis may have been eroded away.

Me, I'm convinced this is a rendering of Kokopelli, deliberately done as such by an ancient hand for reasons unknown.
Posted by JSH at 12:31 AM

Another feature the Reedyville Petroglyph seems to share with archetypes of Kokopelli is the appearance of dancing (one foot depicted higher than the other, and the like).

Perhaps another related concept is the importance of whistling/fluting in the practice of influencing weather (as in 'whistling up the wind), among ancient Shamans here and abroad.

I have always associated Kokopelli with Pan and his Syrinx. Here, one can see a photograph of the baby Pan atop Enid Yandell's Hogan's Fountain in Louisville (Syrinx in his right hand, also seeming to dance):
http://www.flickr.com/photos/65215866@N00/2068037944