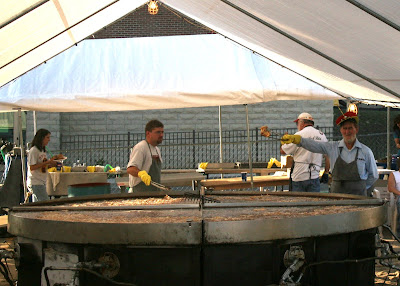 It may not look a whole lot like a skillet (they have a detachable handle that they put on it for photo-ops) but it certainly counts as one - and man, is the chicken dee-lish. I haven't been to London's annual World Chicken Festival lately and probably won't make it there this year either, but I miss it greatly. Next year. It's there that you'll find this amazing monument to man's devotion to fried birds.

The World Chicken Festival was originally held in Corbin, but they moved it to nearby London as the event grew and became far bigger than anyone dreamed. There's plenty of flea-market vendors, musical acts, and other entertainments, but the real centerpiece of the Festival to me is the World's Largest Skillet. Who can say it isn't beautiful?

It's 10 feet 6 inches in diameter, and it weighs 700 pounds. It can cook 885 quarters of chicken at one time, and requires 300 gallons of peanut oil to do so. They also use approximately 375 pounds of flour, 75 pounds of salt, 30 pounds of pepper, and 30 pounds of paprika. On average, 8,000 pieces of chicken are prepared each year on the giant skillet.

Former Lawrenceburg mayor and Harland Sanders lookalike Colonel Bob Thompson (seen below at the Derby) is a regular guest at the Festival. 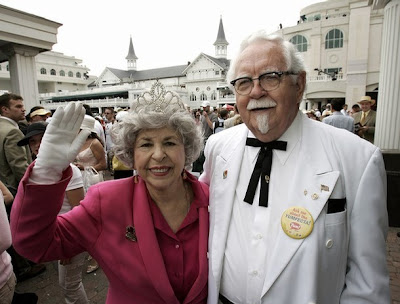 (photo of the superskillet is by Daveblog.)
Posted by JSH at 12:08 AM

In 2003, my best friend Michelle, won the World Chicken Festival clucking contest. She was even on Food Network!