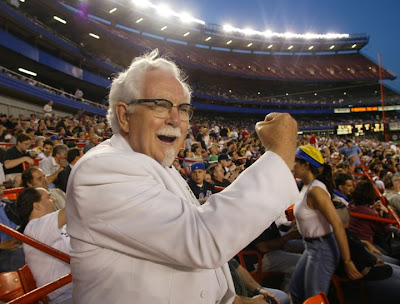 Colonel Bob Thompson (photo above), former mayor of Lawrenceburg, is in demand these days as a Sanders impersonator. According to his website:

"Thompson has appeared as the late Col. Harland Sanders, the Kentucky Fried Chicken founder, in promotional events marking the 50th Anniversary of the KFC restaurant chain. Thompson has also won several look-alike contests, most notable was the World's Chicken Festival.

Colonel Bob makes many personal appearances. Please contact him for your special event!"

And then there's Don Decker (photo below) who LEO Weekly recently profiled. According to the article, Decker is a man with a criminal past who found redemption in imitating Harland Sanders for tourist photo-ops at Louisville's Fourth Street Live (Much to Fourth Street Live's dismay.) 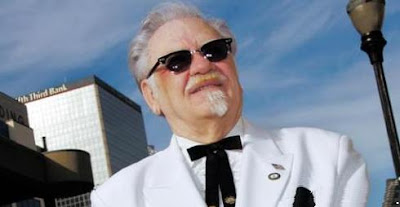 A third Sanders mimic, one Thomas Rost, is mentioned on numerous websites that all seem to be referencing a now-removed Wikipedia entry. Aside from that, I can find no info on Rost.

At this rate, professional lookalikes of Sanders could one day be as lucrative a gig as Abraham Lincoln impersonators.
Posted by JSH at 9:42 AM

Does the college professor from 'The Waterboy' count? Or is there something wrong with his Medulla Oblongota?