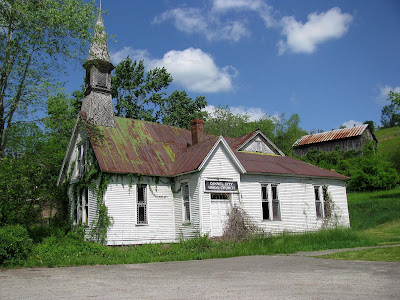 Today I received some nice photos from fellow seeker-of-creepiness David Domine, who says:

"I was doing some research in eastern Kentucky a couple of weekends ago, and I drove through this weird little town, Cannel City, which turns out to be one of Kentucky's ghost towns. (I read your post about Fudge, but don't know if you'd heard of this one...)

I found this info about it online." 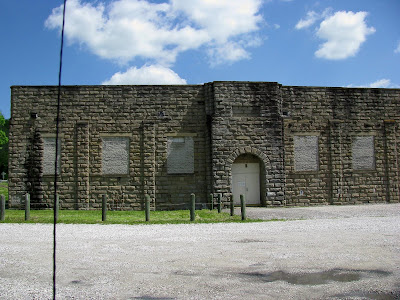 From that link, we learn:

A type of coal high in volatile constituents and thus burning brightly, cannel coal was once prized as a fuel used in lighting homes and businesses: and so in 1910, the coal veins in this patch of Morgan County in central Kentucky were a significant commercial commodity, enough to warrant a large mining operation, the importation of hundreds of miners, a special railroad (the Ohio and Kentucky Junction-Cannel City line), and a bit later a major chemical plant operated by the Pearsite Company. With all this, Cannel City prospered: churches, a bank, an elegant hotel.

The usefulness of cannel coal, however, declined once coal gas, then electric lighting, became commonplace.

very cool. i would like to see more of kentucky's ghost towns