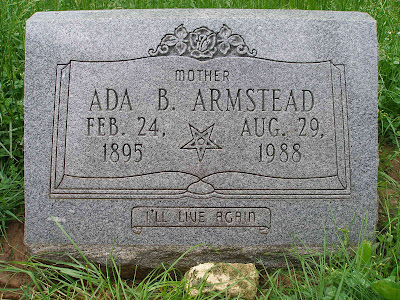 One of the graves in Eastern Cemetery has unfortunately developed a ridiculous reputation as a "Witch's Grave" or "Satanic Grave", for the stupidest of all possible reasons:

First of all, it's commonly known (seriously, it's very commonly known) that a Masonic-oriented Bible-based organization for women known as the Order of the Eastern Star employs a five-pointed upside-down star as its emblem. It is seen on countless headstones in cemeteries. It's no big deal. It has nothing to do with satanism, witchcraft, Wicca, paganism, etc. and has no symbolic relation to Baphomet or the inverted pentagram symbol that pop-culture-overloaded youth, in their ignorance, so readily and superficially associate with all things occult.

Secondly, "I'll live again" is an extremely common sort of Christian sentiment found on graves, referring to the promised Biblical resurrection wherein the dead return to life, either literally on Earth, or spiritually in Heaven, depending on your interpretation of the Scriptures. Any old cemetery is filled with inscriptions like "I Will Live Again", "I Shall Return", "We Shall Meet Again", "I Am Not Dead But Only Sleeping", etc. It's no big deal.

There is every indication that this was simply a nice little old lady, a devout Christian, who spent time with her Eastern Star gal-pals knitting and tatting. Grow a brain and stop perpetuating this ridiculous rumor about someone's dead grandmother.
Posted by JSH at 12:03 AM

yeah, that really sucks. if an OES star is all it takes to make someone a witch, these people better wake up, there must be millions of witches buried in america's cemeteries!!