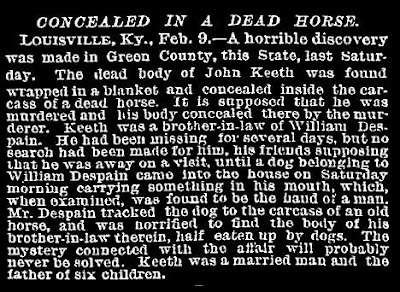 Now here's something you don't see every day.

A news squib of a gruesome discovery of one John Keeth being found dead inside a horse's carcass in Green County on February 9th.

And what tipped people off to it was that most hackneyed of cinematic cliches, a dog wandering around with a human hand in its mouth (See Yojimbo, Rising Sun, and Wild At Heart, among others).

The story was also picked up by the Hunterdon County Democrat, Trenton, NJ, in the February 15 edition:

The body of John Keeth, a married man and the father of six children, who had been missing for some days from his home in Green county, Ky., was found last Saturday, wrapped in a blanket and concealed within the carcass of a horse. The body had been half eaten by dogs. Keeth’s death is wrapped in mystery.

If you've got to go, go inside a horse.