The concept of the "Moose Lodge" has been used as a stereotype and a cliche so often in fictional works of the 20th century, one could easily forget that there really is such a thing as Moose Lodges. They're called the Loyal Order of Moose, and they boast approximately two million members today.

Stranger still, the Loyal Order of Moose was founded in, of all places, Kentucky.

The Loyal Order of Moose was founded in 1888 in Louisville as a "social and drinking club" (I like it already!) by Dr. John Henry Wilson. (Apparently they like to do a little gambling as well.)

When Dr. John Henry Wilson, a Louisville, Ky., physician, organized a handful of men into the Loyal Order of Moose in the parlor of his home in the spring of 1888, he and his compatriots did so apparently for no other reason than to form a string of men's social clubs. Lodges were instituted in Cincinnati, St. Louis, and the smaller Indiana towns of Crawfordsville and Frankfort by the early 1890s...

This John Henry Wilson is apparently no relation to the U.S. Representive of the same name from Crab Orchard, who lived during the same time period, and who died in Louisville. 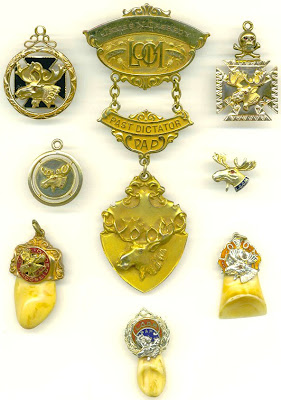 To become a member, one must affirm a belief in God, although members of all religious faiths are welcomed.

funny thing is, now I want to join them!