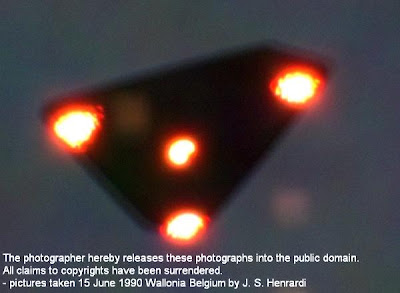 On March 18, a citizen in Stanton had a sighting of a triangular-shaped unidentified flying object. According to the NUFORC report that was filed on the encounter:

I was on my way to work driving along the Mountain Parkway when i saw something large in the sky ahead of me. I wouldn't have noticed it if it weren't for the lights on the front. It was just above the trees and sat motionless. From the distance I thought it was perhaps a plane or a helicopter but as I drew nearer I saw that it had a triangular shape and didn't wasn't making any sound. I pressed the gas harder and quickly hurried on down the road. I chanced a look back and was shocked to that it was gone. Where could something that big go that fast?

Just the day before, a very different-sounding UFO had been spotted over Lexington:

I saw a bright dark blue light in the skies, about 100’ (rough estimate) in the sky over a wooded area next to the freeway in Lexington, Ky. The light was not extremely bright, like a police light or the sun, but rather like a blue runway light at the airport. The light was steady and there were no other lights, flashing or otherwise. It appeared as though the light might have been suspended under a small, white parachute, but it did not seem like the movement of the light was consistent with a parachute.

And a week before that, an egg-shaped UFO was allegedly seen over Virgie, KY. This was "shaped like an egg, with the pointy end pointing forward", which, if you think about it, sounds somewhat like a cross between the triangle UFO and the white parachute UFO.

It's possible there's some connection between these sightings, but the great variance in the descriptions leads one to be skeptical. However, on March 30, almost two weeks after the Stanton sighting, a Louisville man reported another triangular UFO that sounds very similar:

"It was shaped like a triangle with a dent in the middle, like a mouse pointer. There were a row of white lights from the tip to the end and a red light at the very end. I could tell that it was dark grey at the top and light grey on the underneath. As I slowed down to watch and to try to get a picture, the object moved behind a row of houses and some trees then it hovered over one houses roof about a foot from it. None of the houses had lights on.

I turned down a side street to try to get closer and watched another object with similar bright lights fly very quickly across the sky far in the distance for about 50 seconds. I turned back down the main road from before and onto the same side street and another object was flying directly above my car. It was shaped exactly like the object from before, triangular and with a row of white lights with one red light at the end. There was no noise, as with an airplane and the object flew very quickly as I guess it realized I was there and took off to quickly for me to see or follow. I continued down the road and parked in front of my house when I saw at least 3 more objects. When I finally came inside it was about 11:40PM. After coming inside, I have seen at least 5 normal planes flying across the vicinity in the past 5 minutes."

Puzzling evidence? Or is the triangle shape just the current fad for swamp gas hallucinations? (Although Unidentified flying black triangles have been reported since the 1940s, the meme has taken a definite spike upwards since the 1990s.)