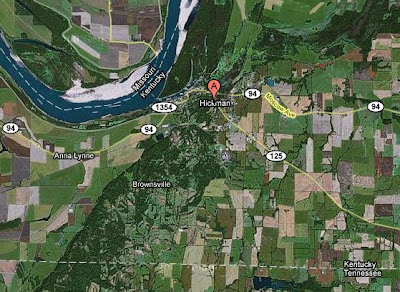 Ever heard of of Fudge, KY (not to be confused with Kentucky Fudge)? It's now said to be a ghost town, but it reportedly was once a small community in Fulton County, approximately 4 miles southwest of Hickman.

A small town in the 1850s and 1860s with a population of less than 50, Fudge was abandoned after a few years after settlers determined that the land was inarable. Poor drainage and salinity on the site rendered the soil inadequate to support sustained farming cycles. The earth beneath the site is rich in limestone, with collapsing (slowly dissolving) caverns beneath.

Now you've gone and done it...some place ELSE I have to go...geez! LOL

this place is a hoax. not a fun hoax like midgetville, but an actual, there's nothing there sort of hoax.