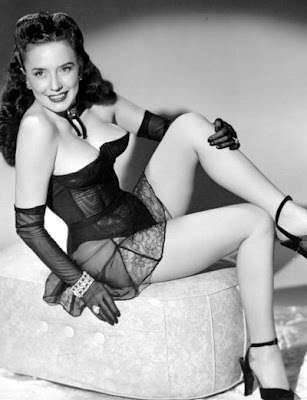 Burlesque stripper Evelyn "Treasure Chest" West was born in Elroy, KY (Adair County) as Amy Mae Coomer. Although she worked small jobs like circus sideshows and did some performing in bit parts for films like Rhythm on the River (1940) and Birth of the Blues (1941), it wasn't until after World War II that her career really took off as a stripper, working San Francisco clubs and posing for Bunny Yeager. 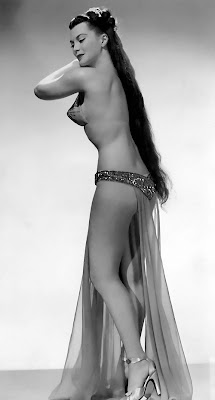 Evelyn also occasionally returned to her home state to perform in the delightful sleazy drink-dens of Newport, KY during its "Sin City" days.

According to an article in the February 1956 issue of the men's magazine Sir!, West invested $5,000 in a plan her boyfriend Steven Vitko had for building an experimental flying saucer for the U.S. Government. He never built the flying saucer, nor repaid the investment, so she sued in 1952 to recover the money. Sir! Magazine doesn't say whether she won or lost the suit.

She lived a tranquil live in her final years in a modest home in Florida, and was reportedly an avid eBay seller.

View: Evelyn West film footage
Posted by JSH at 12:37 AM

I would have liked to have gotten to know that "Treasure Chest" better. :)