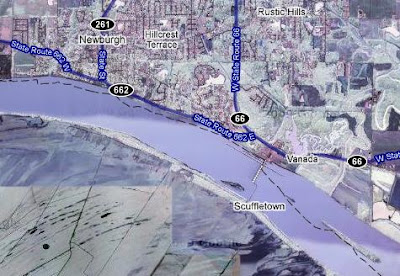 Another of Kentucky's Ghost Towns is Henderson County's Scuffletown, which is on the Kentucky-Indiana border along the Ohio River, just above the mouth of Green River.

According to the 1976 book The Annals and Scandals of Henderson County by Maralea Arnett, Scuffletown was built up around a tavern/trading post run by one Jonathan Thomas Stott. "Since he kept a good supply of liquor, it became a rendezvous for flatboatmen and others on the river. Often a general fight developed after several hours of drinking and the place received the name of Scuffletown."

A tobacco-processing operation in Scuffletown was quite successful, exporting 400 to 450 hogsheads of tobacco per year to Europe, for pipe tobacco and nasal snuff.

According to them there Wikipedia folks:

The site witnessed numerous Civil War-era activities. It may have been the intended target of a raid by a handful of Confederate cavalrymen from Tennessee led by Captain Jake Bennett. It was Colonel's Johnson set up his cannon a few miles below Scuffletown to take Newburgh. The Silver Lake No. 2, a sternwheel packet (steamboat) weighing some 129 tons and outfitted with six cannons capable of firing 24 pound shot, stopped at Scuffletown during its patrols of the Ohio. In 1863, eight Union companies of infantry and one company of artillery were stationed at Scuffletown to protect the area of Confederate raiders. Scuffletown is mentioned in the Civil War account Operations of the Mississippi Squadron during Morgan's Raid.

The 1913 flood greatly devastated the city, causing a mass exodus that they never recovered from. Its post office closed permanently the following year. An even larger flood in 1937 decimated what was left, and a vast chunk of real estate has sat inexplicably deserted ever since. There's been talk for a decade about having it declared a protected wetland and setting up a national wildlife refuge there, but so far not much has happened.
Posted by JSH at 9:21 AM