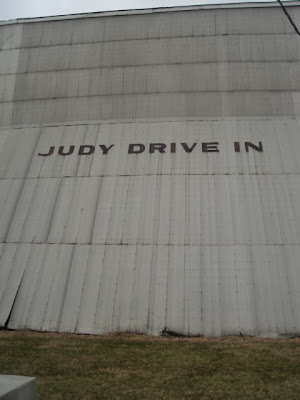 One of the absolute last of a dying breed, the Judy Drive-in carries the tattered flag of outdoor film enjoyment into the 21st century. The drive-in is so named for the tiny community of Judy, a suburb of Mt. Sterling.

Located at 4078 Maysville Road, the Judy Drive-In is actually one of the more progressive examples of this highly retro line of business. Not only do they show first-run movies, they broadcast the audio signal in FM stereo and actually encourage people to get out of their cars and stroll around the grounds, watching the film while listening to the audio on their walkmans. They also sell PIC insect-repellant coils. Their screenings go on rain or shine, and are only ever cancelled in the event of a severe thunderstorm. 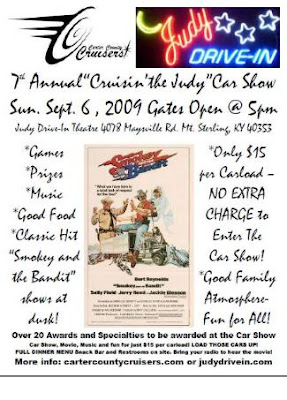 On September 6th they'll be hosting a car show, "Cruisin' the Judy", with games, prizes, food, music, and Smokey & The Bandit showing on the big screen at dusk.

The Judy Drive-In opened on the fourth of July, 1952, and has been in continuous operation ever since.

(Photo above from UnK regular Nicosia's wonderful photo-travel blog, Roadside Weirdness.)
Posted by JSH at 12:08 AM