The Haunted Restrooms of EKU 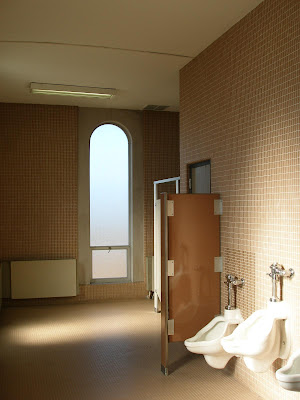 In the early 1990s I received a firsthand account from a former Eastern Kentucky University janitor, who affirmed having witnessed the "glimpse from the corner of your eye" variety of ghosts in several of the restrooms in the Bert Combs Building.

Specifically, both sets of the third and fourth floor men's restrooms were said to be haunted (there's a men's room on diagonally opposite sides of each floor). The former EKU employee said he often felt an eerie presence in the rooms with him while cleaning the place up at the end of the day. He gradually grew accustomed to the entities, and reported that another janitor corroborated his story.
Posted by JSH at 11:01 PM

Seems like I did see some strange things there from time to time once upon a time ago. Anyway, I do remember that one restroom they had that had the persistent smell year after year.

Man, I've destroyed that bathroom many a time.. I've never heard about the bathrooms being haunted but they were always pretty creepy if you had to go during a night class. According to the graffiti in the end stall in the fourth floor, it was a gay hookup area. Anytime I had to take a dump in that stall, the scene from "Dumb and Dumber" would come to mind anytime someone opened the door, because there would be notes like "Be here at (time & date) for a good s*ck" and I would always have to make sure I wasn't in the stall at the wrong time.

Most of the dorms are haunted at EKU, as well as the Pearl Buchanan Theater... which is haunted by something pretty damn pissed off.

I can attest to the Pearl Buchanan Theater being haunted. I was in a production there, I stayed later than everyone else which meant I had to go turn off the lights in the upstairs part.....VERY UNEASY feelings the whole time I was sitting there.

Keene is haunted by a student that committed suicide not too long ago. I stayed in room 308 across from the elevators in 2000-2001 and got a picture of his ghost one night when he passed in front of our window then shot up to the room above us and made a sandal stand on end. As a resident assistant in 2004-05 i stayed in a room in case with an older man ghost that sat on my bed one night and definitely didnt like me. Clay had entire floors that were haunted. Every single door on a hall would fly open all at once. Very active building during the summer break. Guess they get bored when students are gone. Sullivan was a hospital during the civil war. Evidence of the morgue is still in the basement.

I experienced a few hauntings in and around the Powell Building. It could have been the ghost of Pearl Buchanan walking around the attached buildings, or just the overactive ramblings from the minds of students, either dead or still living.