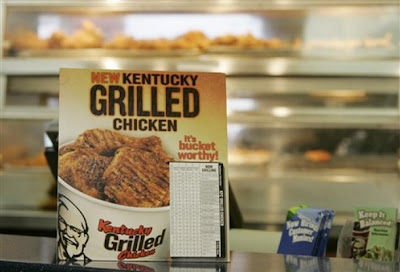 What's the fuss about? Well, PCRM is alleging the chain has failed to warn its customers that its grilled chicken contains a carcinogen: PhIP, an amino commonly found in grilled meats of all kinds. That's also including when you grill meat yourself at home, so pretty much everyone on the planet who isn't a vegetarian has ingested plenty of this stuff, by their own hand, in their own home. So why pick on fast food restaurants?

The answer is: because PCRM has a definite anti-meat agenda and probably would like nothing better to see meat-eating abolished in America. Fast food restaurants, often scapegoated, are an easy target to start building towards this goal. Don't take my word for it, peruse PCRM's wacky website and see what you think. Also take a look at their press release about their attack on KFC, and note the overt scare-language like "dangerous carcinogen" (isn't that redundant?).

Appallingly, the press release even admits that only twelve samples of the KFC product were tested, and from only six locations. That doesn't even come close to being statistically significant, and is completely unscientific. For those who wish to obtain more detailed information, you have to do some digging around and find the PDF of their report.

According to consumerfreedom.com, the PCRM is a front group for PETA, which certainly clarifies things. They also quote the American Medical Association giving the PCRM a public ass-kicking back in 2004:

"The general approach used by PCRM takes selective data and quotations, often out of context ... In response to a Resolution passed unanimously at the recent AMA House of Delegates meeting, the American Medical Association calls upon the Physicians Committee for Responsible Medicine to immediately terminate the inappropriate and unethical tactics your organization uses to manipulate public opinion."

Of course, I can't totally support consumerfreedom.com either - as with most things, the truth lies somewhere in between the two extreme viewpoints. Consumerfreedom.com defends some things I can't get behind at all, like High Fructose Corn Syrup (which I believe is very bad but often consume it anyway) and NutraSweet and Splenda (which I regard as poison and won't touch - EVER). But consumerfreedom.com's position is that even when things are bad for you, the public should still be allowed to consume them if they really, really want to - and I tend to agree.

And according to Activist Cash:

PCRM is a fanatical animal rights group that seeks to remove eggs, milk, meat, and seafood from the American diet, and to eliminate the use of animals in scientific research. Despite its operational and financial ties to other animal activist groups and its close relationship with violent zealots, PCRM has successfully duped the media and much of the general public into believing that its pronouncements about the superiority of vegetarian-only diets represent the opinion of the medical community...

Often appearing in a lab coat, PCRM president Neal Barnard looks the part of a mainstream health expert. He also churns out a steady stream of reliably anti-meat and anti-dairy nutrition research. Although his “results” generally conclude that a vegan diet (practiced by a tiny fraction of Americans) will solve any of dozens of health problems, the mass media eats them up. And PCRM is media-savvy enough to take advantage.

But Barnard was trained as a psychiatrist, not a nutritionist. His nutritional advice boils down to one basic message: don’t eat meat, or anything that comes from animals.

I have no plans to stop eating KFC, nor do I intend to stop grilling at home.
Posted by JSH at 10:38 AM

Interesting. Oh well, I'm going to die someday whether I want to or not anyway.

I would NEVER make it as a vegetarian. I don't care who says meat is unhealthy for people to eat....I could never stop eating meat, especially if it is grilled steak! Yum! If for some reason eating meat was outlawed, I would be the first to secretly buy a cow and raise my own on the sly.

Fuck a bunch of PETA freaks.