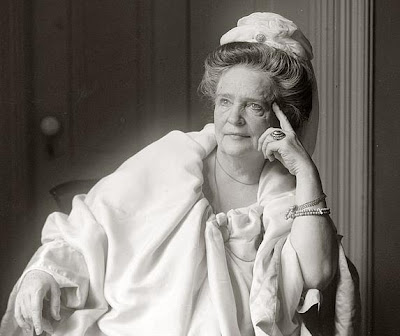 Harry Houdini referred to her as "one of the most extraordinary fake mediums and mystery swindlers the world has ever known". Despite this, she was apparently sincere about the paranormal on some level, and was genuinely influenced by more legitimate occult practices such as Helena Blavatsky's Theosophy. Blavatsky (pictured below) believed that all religions were true at the core of their innermost teachings. Her writings, combining esoteric spiritual philosophy with modern science is considered by many to be the progenitor of "New Age" thought. 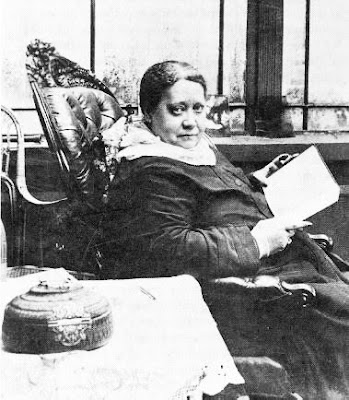 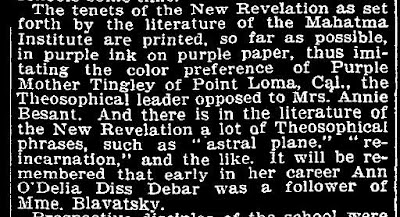 In 1870, under the name Editha Gilbert Montez, she swindled a lot of money by passing herself off as the daughter of famous dancer/actress Lola Montez. By the 1880s she was in a fraudulent Spiritualism racket and claiming to be related to West Virginia lawmaker Joseph H. Diss Debar. In truth, she was born Editha Salomon in Harrodsburg, KY and raised in Louisville.

In 1888 she was sentenced to six months in prison on charges of fraud. After getting out of jail, she went right back to her phony-medium cons (as Vera P. Ava), and her fake-royalty pose (as Princess Editha Lolita). In 1898 she was living in New Orleans and it was there that she married her partner in crime, Frank Dutton Jackson.

After a brief jail stay in Louisiana, the pair next popped up in Paris, where they met occultist S. L. MacGregor Mathers. By claiming to be Anna Sprengel, Editha managed to gain access to top-secret texts of the Hermetic Order of the Golden Dawn, which the pair subsequently absconded with. The incident is mentioned in a footnote about Mathers in The Collected Letters of W.B. Yeats: 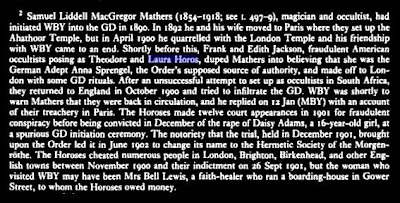 Interestingly, as it turns out, historians now believe there was no real Anna Sprengel, having been a hoax concocted by William Wynn Westcott. But Westcott's backstory of this mythical Anna Sprengel includes her being the daughter of Lola Montez, which begs the question: was it actually Editha who created the character? Was Westcott a co-conspirator, or he was duped by her into believing this persona? Yet, one must ask, why would she need to return to steal the secrets of the Golden Dawn, if she was in fact its co-creator? What a mess.

They spent time at the Koreshan Unity religious commune in Florida, learning about Hollow Earth theories of its bizarre founder, Cyrus Teed. (At some point in her exploits, Editha also operated a fruitarian colony in Florida, which may or may not have been related to the Koreshan Unity organization.) After leaving Florida, Editha and her husband gallivanted across Europe claiming to be high-ranking representatives of Teed's organization, which they most certainly were not. 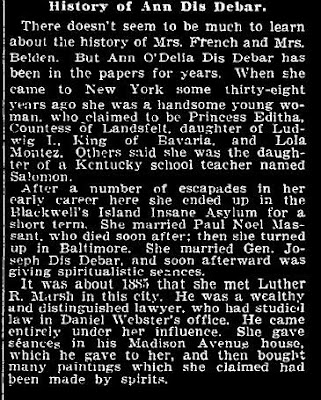 In 1890 they were in South Africa, opening a "College of Occult Sciences" in Cape Town. As "Laura Horos", she lectured on the stolen teachings of the Golden Dawn and gave clairvoyant readings under various pseudonyms. Their college had moved to England by 1900, and their curriculum had expanded to include magnetic healing, parapsychology, clairvoyance, divination, materialization of ectoplasm, thaumaturgy, and channeling divine entities.

Some twisted sex magick was apparently also a big part of their system: in 1901 they were arrested for rape and buggery of a sixteen-year-old girl, jewelry theft and false pretenses. Jackson (who was by now calling himself "Theodore Horos") got 15 years, Editha got 7. She was released early, on July 1906, for good behavior. 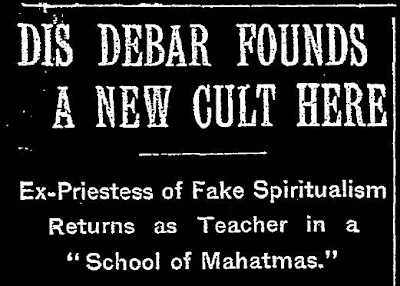 The New York Times was seemingly fond of covering her sensationalist antics, as can be seen by combing through their archives. In them, you'll find a whole treasure trove of odd gossip about her adventures in addition to those mentioned here.

One of the many notches on Editha's arrest record was an incident in which she was caught stealing money from an elderly woman who had hired her to try to contact the ghost of her deceased husband in a private seance. Hearing of this, I have to wonder if The Rainbird Pattern, the 1972 novel which became Alfred Hitchcock's 1976 film Family Plot, was inspired in part by Editha and her husband. The book and film are about a husband-and-wife con duo whose scams revolve around her phony-psychic routine.

Late in 1909, Editha was living alone in Cincinnati, Ohio, once again using the name Vera Ava. And then she just disappeared. We don't know where or when she died, and we don't know where she is buried. The proximity to Kentucky in her last known appearance nudges the imagination into supposing that she might have come back to her Kentucky.
Posted by JSH at 12:00 AM

Amazing! I've had some fascination with the character/existence of Anna Sprengel. I'm sure I've never run across the informative gems contained in this post.

All I can say is wow. It's a big wide crazy world out there.

They should make a movie about her!

A motion was filed in 1920 to remove a "Mr Frank Dutton Jackson, an American" from India, on grounds of his behavior. How bad must you behave to get kicked out of a country?

I'm assuming this is the same one that was her husband.