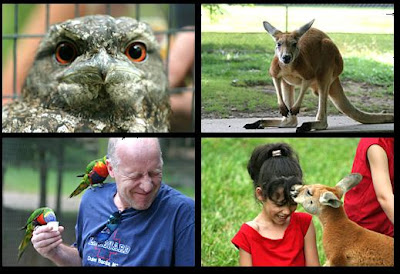 Kentucky Down Under is a nature preserve/theme park located in Horse Cave, KY (take exit 58 off I-65). Like Henry's Ark, it presents its visitors with the cognitive dissonance of seeing exotic animals roaming semi-openly (as opposed to a constrictive zoo-like environment).

Kangaroos are what Kentucky Down Under is best known for, but there are many other odd Aussie critters creeping around: Emus, Green Tree Pythons, Bettings, Kookaburras, Lorikeets, Swamp Wallabies, etc.

But wild Kangaroo sightings in Kentucky have occurred over the years as well.

In 1899 there was a spate of reports of wild Kangaroos being sighted all across North America, including in Northern Kentucky. I hate to invoke the debunker's term "mass hysteria", but in this case, surely a lot of people thinking they were seeing Kangaroos pop up simultaneous across the continent were mistaken (On the other hand, maybe it was just your standard run-of-the-mill quantum temporal timespace displacement vortex).