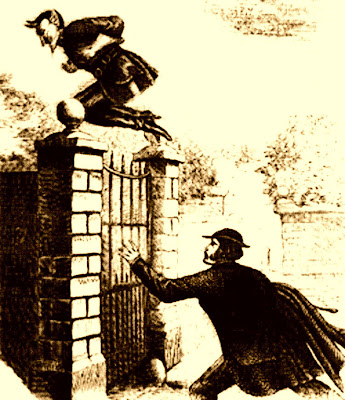 The legend of Springheel Jack, or Spring-Heeled Jack, began in England when reports began to surface about sightings of a strange humanoid creature with batlike wings, small pointy horns or ears, a black leathery flowing cape, and an ability to jump and bounce like a kangaroo on steroids. That may sound somewhat ludicrous to readers today, and yet over a century ago thousands of people in England were completely convinced Jack was real.

And I'm not saying he wasn't.

Spring-heeled Jack was so named for his ability to leap great distances in a single bound, a feat testified to by many sane and sober sworn witnesses of the day. Even the British Army took the notion completely seriously and issued warnings about him after he was allegedly spotted defying the laws of physics by leaping from the ground to the rooftop of one of their sentry guntower posts in 1870.

At the time I wrote the Weird Kentucky book I'd relied on a source that said 1837 was when the Jack reports began, but since then I've read another source that recounts an 1808 letter to the Sheffield Times, telling of Jack sightings from many years prior. This puts the earliest days of the legend of Spring-heel Jack firmly into the 18th century. 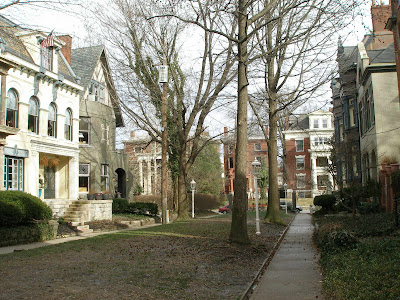 Many believe that Jack, if real, somehow made his way to America and came to Kentucky. Researcher Jim Brandon tells of reports from July 28, 1880 of a "tall and thin weirdo" appearing out of nowhere and terrorizing citizens of the "Old Louisville" section of downtown Louisvile (which wasn't so old then).

Reportedly this Kentucky Jack caused chaos in the streets with his high-jumping antics, and tore clothing from random females. Eyewitnesses described his superhuman ability to jump impossible distances and heights, evading capture by leaping over horse-drawn carriages and onto roofs. This Jack was described as wearing a cape and a helmet, and having an eerie glowing light emanating from his chest.

We can also deduce that this Jack appeared in outlying farm country - probably in the direction of Butchertown - because one of the sightings mentions him jumping over haystacks, and then vanishing behind one.

Spring-heel Jack may well be the template from which sprung a number of bogeymen popular in our collective unconscious today: the reports sound as if they're describing Batman to a T, and some have also compared the phenomena to the Mothman. The whole idea of "Jack the Ripper", including the name, may also have been inspired by the Springheeled Jack stories. 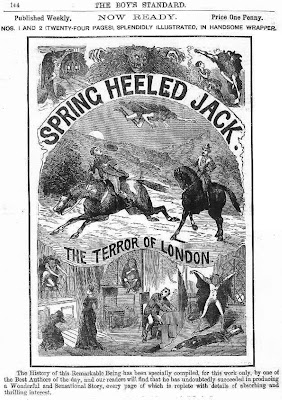