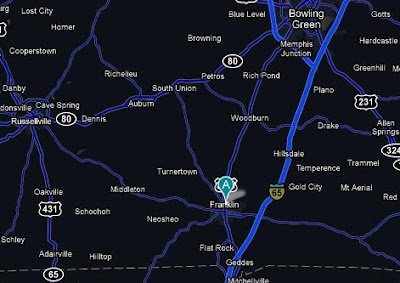 "Traveling highway speed northbound on I-65 at exactly 8:30 PM near Franklin, KY - GPS fix: N36 45 W86 29. In the sky on right side, I saw a fast moving ball of light going northward, seemingly descending downward. I thought it was a comet or shooting star. The color was not white white but slightly off-white. Then there was a red "blip" where most, not all of it flashed red, then it disappeared. Lasted for approx. 1 second. It seemed strange because it seemed that at the end of its trajectory it speeded up quite a bit the split second before it vanished. There was a major car accident several miles earlier, which had stopped interstate travel for about 1 hour."

...as opposed to descending 'upward' I suppose...

I've been working 3rd for years and haven't seen much other than an occasional strange or disappearing light. Franklin gets fireballs...oh well.