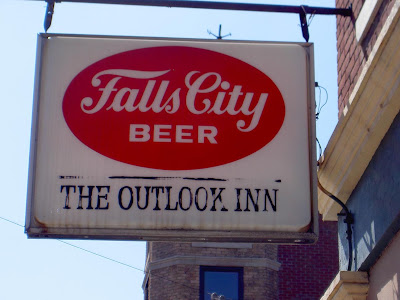 There's been a lot of confusion for a long time about the on-again/off-again existence of Falls City Beer.

Originally it was made by Louisville's Falls City Brewing Company from 1908 to 1978, then went through a long period of absence. In the early 1990s the name came back under the auspices of the Evansville Brewing Company (but hardcore fans say it just wasn't the same).

Evansville Brewing closed in the late 1990s and the Falls City brand was purchased by Pittsburgh Brewing Company. They, in turn, chose to stop selling it. So now we're in another dry spell in Falls City's history, but something tells me we haven't seen the last of it.

The Falls City logo, however, is extremely popular with beer collectible enthusiasts and remains highly visible on bar signs in some parts of Kentucky.

Falls City, incidentally, was the originator of the "sta-tab" opening for canned drinks. They introduced it 1975 and by the early 1980s, all soft drinks and beers were using it.

Another cultural icon we have Falls City to thank for: Billy Beer, launched in 1977 as a way of piggybacking onto the beer-swilling notoriety of Jimmy Carter's brother Billy. Although it was a huge success, it just as abruptly nose-dived in popularity along with the Carters themselves. 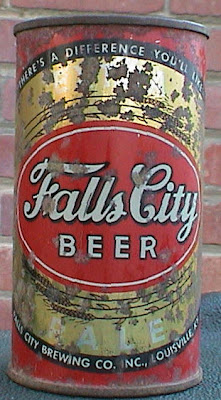 According to Wikipedia, "It was a light-bodied golden lager of the American standard or American pilsner type. It was brewed with six row malted barley, corn or rice adjunct and was lightly hopped". If they say so. Personally, I don't remember anything remotely hoppy about the stuff. In a blind taste test, I couldn't tell Falls City from Black Label from Old German from Wiedemann from whatever else you find on the left-hand side of the liquor case in any given gas station. As a cultural icon, it rocks; but as a beer, one might as well have tucked a piece of bread in a glass of water and left it in the sun to ferment for a few hours.
Posted by JSH at 12:01 AM