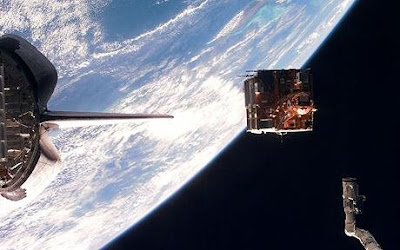 According to WKYT-TV last night:

27 NEWSFIRST started receiving phone calls tonight telling us a loud boom, or series of booms were heard this evening in Southern Kentucky. So we called emergency officals, to find out what is going on.

Brian Reams of the Laurel county EMS tells us they've had calls from Jackson to London, about a loud boom. He says there are no reports of any injuries or damage.

In the last little bit, Reams says he's been told by the state police in London that according to the FAA, the boom is from falling debris, coming from two satellites that collided in space. The debris re-entering the atmosphere caused the loud boom, and then burned up before hitting earth. Reams says it could have covered a 500 mile area.

I just checked and sure enough, there was a collision between two satellites in space, but it was last Tuesday.

So, if the FAA has indeed advised the police that pieces of satellites are raining on Kentucky, shouldn't that be considerable cause for alarm? It's a bit weird that this news story is more concerned with the 'boom' sound rather than the fact that chunks of hot metal are apparently falling on us, and I don't necessarily accept the assurance that they're all burning up before they reach the ground.

If anyone finds any burnt metal they believe to be a piece of the space debris, let me know! I'd be very interested in examining it.
Posted by JSH at 8:08 AM