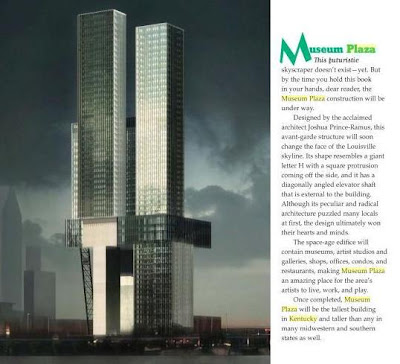 I hyped this building on page 162 of Weird Kentucky, and for good reason: once built, it will instantly be the most unusual and unique structure on the Louisville skyline. Not to mention the tallest. It will be a major architectural revolution for Louisville, and indeed the whole Ohio Valley.

The construction on the building has been temporarily postponed, but fear not: co-Developer Craig Greenberg has recently issued a public assurance that the project is in no danger, and it's still, in principle, all systems go. According to WLKY:

"We are a 'shovel-ready' project that can begin construction as soon as we receive construction financing for this project," he said, adding that he couldn't commit to a time-line for that taking place. "Financing projects like Museum Plaza can be difficult if not impossible today," he said. "Nonetheless, we continue to make progress." Greenberg said LG&E has been relocating underground electrical lines and moving a large transmission tower currently on the property.

Sooner or later Museum Plaza will be up and running, and when it does, I will have office space there, both for my artwork and my theatre company.
Posted by JSH at 10:37 PM

It will be nice to watch a local sporting event on national tv and not have the giant bat or Churchill Downs shoved down your throat as the 'bumper' video. This building will certainly draw it's fair share of attention from the national media. I've never seen anything like it. I hope all goes well.