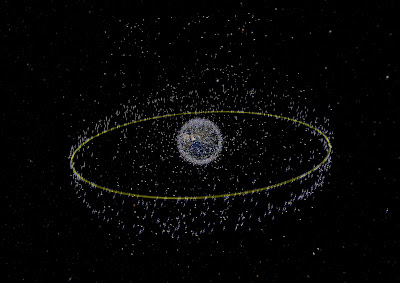 A couple days ago, it was reported that the FAA admitted the weird booming sounds heard in Kentucky were pieces of the U.S. and Russian satellites that collided last week, burning up on re-entry.

Now, the FAA have abruptly changed their story.

LEXINGTON, Ky. (AP) -- Astronomers say bright lights in the sky and noises like thunder observed over much of Kentucky were meteors.

The Lexington Herald-Leader reported that after the reports came in from people in Kentucky and Texas late Friday, the Federal Aviation Administration cautioned pilots to beware of satellite debris, but the advisory was quickly withdrawn.

FAA spokeswoman Kathleen Bergen said it was a natural phenomenon.


That's how the AP wire story (cited in the Paducah Sun) described it, but if you look here at kentucky.com, you'll see that's not quite what Bergen said. What she said was "It was the result of some sort of natural phenomenon".

Even if they have super spy-telescopes pointing both up to space and down at the Earth's surface, and even if they have teams of secret agents combing the hills with secret tracker gizmos, how can they be so sure of themselves?

The recent satellite collision has released, in the BBC's words, "massive clouds of debris" into orbit - so much debris, in fact, that the NASA Orbital Debris Program Office at Johnson Space Center has been thrown into a tizzy trying to sort it all out. Such a task will take months, maybe even years. Are the military claiming they've achieved it in just a few days?