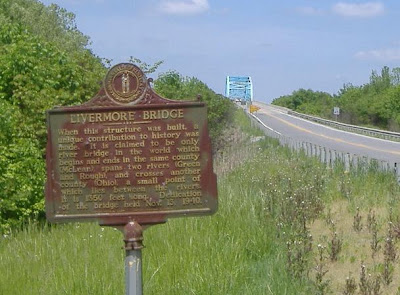 The Livermore Bridge, located in McLean County near the city of Livermore, has often been referred to as "the longest bridge in the world", and was so designated by Ripley's Believe it or Not. The claim isn't even close to being true, however - I did a quick Googling and found that although people don't quite agree on what exactly is the longest bridge on Earth, Kentucky's Livermore Bridge is nowhere in the running.

The Lake Ponchartrain Causeway is generally regarded as the longest bridge in the world, unless you count the Bang Na Expressway, which is an elevated overpass spanning 33 miles but doesn't cross any body of water. 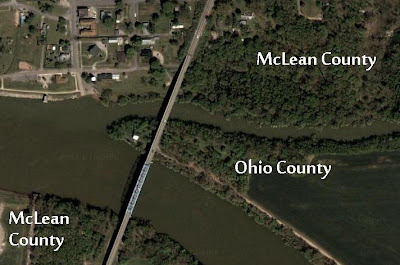 The Livermore Bridge does have a claim to fame for the record books, though: it begins in one county (McLean), crosses over not one but two rivers (the Green and Rough Rivers), and then passes over a separate county (Ohio County), then ends up back in the county it started in. This is the only known occurrence of this kind in the world, and though it may not be Guinness Book of World Records material, it's unusual enough for me.
Posted by JSH at 12:00 PM