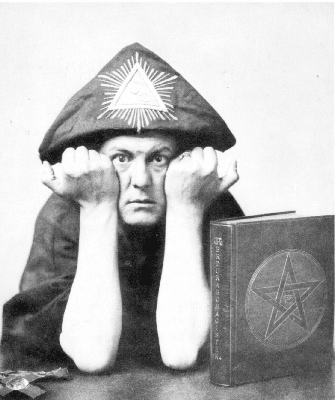 I like to keep up with unusual religions (you may have noticed by now that I rarely use the word "cult") and am often surprised to see the variety of belief systems one can find in our fair state.

Why, there's even a Louisville O.T.O. chapter, believe it or not.

The O.T.O., or Ordo Templi Orientis, is described on their own website as a "hierarchical, religious membership organization" whose mission is to "effect and promote the doctrines and practices of the philosophical and religious system known as Thelema, with particular emphasis on cultivating the ideals of individual liberty, self-discipline, self-knowledge, and universal brotherhood".

Though the group was founded in Germany in the late 19th century by Karl Kellner and Theodor Reuss, it is most famous today because of Aleister Crowley, who joined in 1910 and was running the British lodge by 1912. Because of his drug experimentation, hedonistic sex magick rituals, and general disdain for a significant portion of mankind, he was dubbed "The Wickedest Man In the World" by critics and wags in the media.

Crowley once said: "the O.T.O. is in possession of one supreme secret. The whole of its system is directed towards communicating to its members, by progressively plain hints, this all-important instruction." 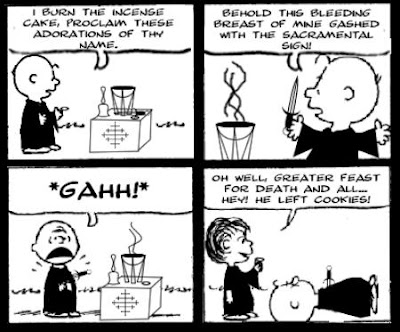 The Louisville O.T.O. publishes a quarterly paper called the Fleur de Lis, which, much like the Eastern Accent before it, features a "Peanuts"-inspired comic strip called "Crowley Brown".
Posted by JSH at 12:03 AM

'Crowley Brown'! LOL! Don't give THIS kid a rock for Trick or Treat!

Love the website, I'm a fan and have kept up with it throughout the years.

I was pleasantly surprised when I saw this entry. Everyone had a good chuckle!