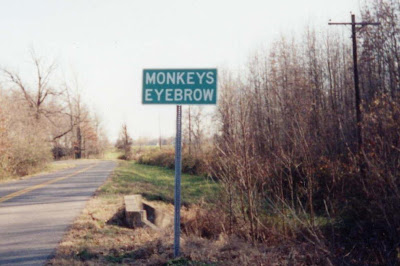 When people sit around riffing on all the oddly named Kentucky towns, Monkeys Eyebrow is always sure to come up in the conversation. It's an unincorporated rural community in Ballard County, close to Bandana, KY.

According to Wikipedia, "There were two Monkey's Eyebrows, commonly known as Old Monkey and New Monkey. One was at the top of a small hill, the other at the bottom. There were stores at both locations. Today, there are no stores. According to an article nearly 30 years ago in the county newspaper, the Advance Yeoman, the area acquired its unique name around the turn of the 20th century". However, like most of Wikipedia's content, there are no sources given for these claims.

Roadside America says, "There used to be a store there, then a souvenir stand that sold t-shirts and trinkets, but I think the only thing there now is a sign for the Monkey's Eyebrow Taxidermy Service. There are several local accounts of how the name came to be, but some folks think it applied to a crescent-shaped hill called Beeler Hill, which someone thought looked like a monkey's eyebrow when the grass was tall."

I'm pretty sure I drove through Monkey's Eyebrow two summers ago while working on the book, but I'm not sure. I didn't actually see any indicators that I was there. I fear the aforementioned taxidermy sign may be gone. I also didn't see this sign that someone took a photo of in 2004.
Posted by JSH at 8:39 PM