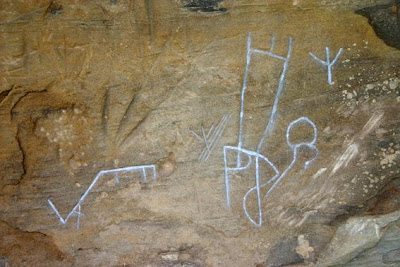 In September 1989, the National Register of Historic Places voted to include this large sandstone outcropping that protruded from a cliff overlooking Highway 66 at Eriline, KY.

It was covered in petroglyphs made, presumably, by ancient man. In 1994, the rock spontaneously broke off and fell into the road, surprisingly intact. Just two days later, arrangements were made to move the giant stone to the Clay County seat of Manchester, where it can be viewed on display to this day. 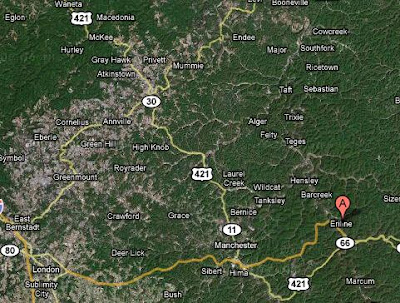 Bill Thayer at the University of Chicago does an excellent job of deconstructing the markings seen on the stone, and debunking some of the odd claims made about the meaning of the glyphs. One of the most prominent markings on the stone has been interpreted as meaning "Jesus Christ, Son of the Father" in a mixture of Hebrew and Greek. However, the glyph in question has absolutely zero resemblance to Hebrew and Greek, and most certainly does not say "Jesus Christ, Son of the Father" in said languages. Whoever came up with this idea clearly knew nothing about Greek, and even less about Hebrew. 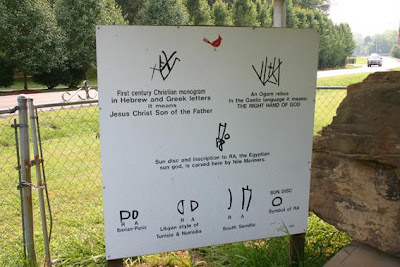 The sign also interprets a simple circle shape as definitely being a "sun disc" intended to symbolize Ra, the Egyptian Sun God. Again, early primitive man was rendering circle shapes long before the Egyptian culture. There's zero reason to find a circle on a rock in Kentucky and declare it to be the work of someone wanting to exalt Ra, especially when seven other languages are supposedly represented here as well.

As Dr. Thayer puts it:

So why do we have eight scripts proposed here? Very simply, because someone has gone fishing for them to support a preconceived notion. If this squiggle isn't Greek, well it's Ogham or "South Semitic" — this last term, by the way, covering several dozen languages modern and extinct, none of which has signs for vowels — or Punic or Runic. Worse than "not true", this is... boulderdash; and very likely with something of an agenda: see this page on Chief Red Bird and the petroglyphs. 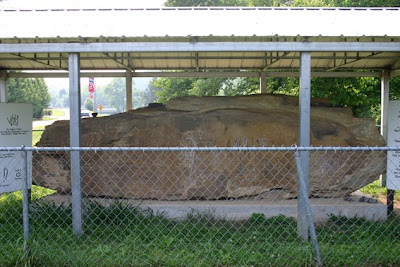 Man, without your blog I would have thought Kentucky was boring. This place is pretty damned sweet as it turns out.