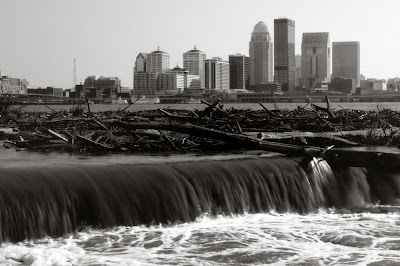 Nationwide drinkers of Falls City Beer probably thought the stuff was named after Falls City, Nebraska or Falls City, Oregon, if they even gave much thought to it at all.

But Falls City is actually an old nickname of Louisville's, one which may seem confusing at first since, after all, Louisville doesn't have any waterfalls, right? And then it hits you, oh yeah, we do - the Falls of the Ohio.

The Falls of the Ohio is generally associated with the Indiana side of the river, mainly because they've (sort of) preserved the fossil beds on their side, and built a park and "Interpretive Center" museum celebrating it. Unfortunately, there's not much left to celebrate - the original falls has been nearly decimated by removal of most of its limestone by the city of Louisville in the late 19th/early 20th century. What was once a towering and grandiose waterfall is now a gentle step only a few feet high.

And the much-touted fossil beds have frankly become a bit of a pathetic joke. According to the official Falls of the Ohio website, "The 386-million-year-old fossil beds are among the largest naturally exposed Devonian fossil beds in the world." And yet, tourists are allowed to tromp all over them, there is essentially zero security to keep people from plucking the beds clean of fossils, and at any given time, the place is filled with garbage, driftwood, dead appliances, chemical drums and other debris. It's not a very pleasant place to be.
Posted by JSH at 9:28 AM

Yep! Kind of sums up the state of the world actually. 400 million years of history and we stomp all over it and abuse without a care in the world.

If you are interested in learning more about fossils in the Louisville, Kentucky area visit these sites on the Internet:

Hopefully, visitors at the Falls of the Ohio State Park remain law abiding and will not take the site's fossils.

The outer fossil beds make for a pretty nice excursion, actually. You can get to them only by walking across the McAlpine spillway (and only when it is sufficiently closed). The limestone makes the lower elevation hotter than on shore, actually, so in the summer it's a sweltering hike.

But yeah, being out there feels sort of like walking an alien planet. The Falls themselves are cool, too, and surprisingly dodgy when the water is kicking.