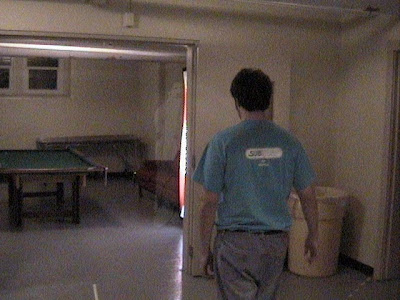 From the ol' JSH mailbag comes this missive from Andrew Beck:

I found your site while browsing around on the internet tonight searching for ghosts and oddities in Kentucky. I was surprised to hear that you live in Madison County, because I have lived in Richmond all my life. I graduated from EKU a few years ago and while there I lived in Sullivan Hall. One of our traditions (before the Fire Marshall shut us down) was the Sullivan Haunted Hall. I'm sure you've heard the stories of the nursing student who killed herself on the fourth floor of Sullivan (a room which I lived across the hall from).

In early October of 2005 (the same year we were shut down) the Sullivan Hall Council was going through the basement of our dorm to figure out the layout for that year's maze. As I was discussing the layout with one of my floor representatives, Reid Connelly, (pictured in the fore ground) I took a few pictures with my camera. Later, I had them developed, and noticed something VERY strange in the photo of Reid near the Coke machine. What I am e-mailing you is a scan of the original picture (hence the graininess; I didn't have a good scanner at the time). The original picture still resides (somewhere) in Sullivan Hall. We had it framed for posterity, but I moved out of Sullivan in Spring of 06, so I couldn't tell you what happened to it.

I think this would be a great edition to your website. I really do enjoy the interesting, unusual, and nostalgic articles you have.

Thanks, Andrew... I'm not really sure what to make of the photo. I'm inclined to believe that it's some kind of light-refraction thing related to the Coke machine, which in fact the anomaly is aligned with perfectly. Nevertheless, I don't have a specific explanation. And there have indeed been stories for a long long time about Sullivan Hall's haunted vibes, some of which I've experienced myself while creeping around its corridors in years past.

See page 186 of Weird Kentucky for more about Sullivan Hall.
Posted by JSH at 11:12 PM

It probably is a trick of the light but I gotta tell ya...it looks a lot like a body with a face on top. Ghosts must get thirsty too!

Although I attended UK, I was a regular visitor to Sullivan Hall at EKU at the same time this picture was taken. I was friends with Reid and the other people on the floor. In any case, I definitely got weird vibes in the basement when I would head down there. Although I made fun of this photo at the time, haha. I think it's a light oddity.