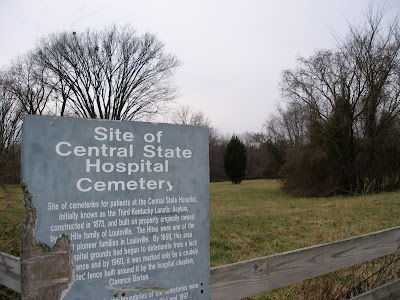 A huge area of Anchorage, KY, including all of the vast E.P. Sawyer Park, was once the dreaded Central State Mental Hospital and its sprawling grounds.

In 1873 the place was the Lakeland Home for Juvenile Delinquents, which soon thereafter expanded its purpose to become an insane asylum. No asylum of that era was ever a friendly place to be, but this one takes the proverbial cake. For decades, hellish conditions, improper care, senseless deaths and unchecked madness lent a continually greasy patina of very bad karma to this land.

Think of every horror story you’ve ever heard about psychiatry, and it’s all here: overcrowding, abuse, insulin “therapy,” forced freezing cold showers as “treatment,” crude lobotomies, electroshocks, you name it. According to Jay Gravatte of the Louisville Ghost Hunters, wards with a capacity for 1600 persons were containing more like 2400, and in 1943 the Kentucky grand jury discovered that Central State was unfairly committing and imprisoning people who were not mentally ill.

Today all the original buildings are demolished, and a new complex of modern clean edifices stand down the road, at the corner of Lakeland and LaGrange. The old asylum's site can be seen here on Google Maps, and if you scroll just a bit south, you'll see the present facilities. 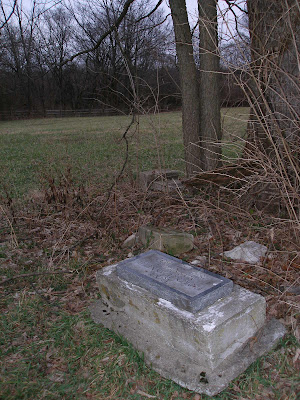 Voices, purportedly of the dead, have been tape-recorded late at night by ghost hunters in the hospital's long-abandoned cemetery, which is also now part of the E.P. Sawyer park grounds. Most of the stones are now missing, and the ones that are still extant are misplaced and piled haphazardly around nearby trees. You can still tell where the graves are, however, by the prominent sinkholes that dot the landscape. It’s one of the most neglected and poorly maintained cemeteries I’ve ever seen, and these people interred here were unhappy enough from the getgo without having their final resting place so shoddily treated.

I have heard the tape and, for what it’s worth, voices are clearly heard although I can’t make out any of it. I remain dubious about the whole EVP concept.
Posted by JSH at 11:15 AM

In the early 90's I attended the Horticulture school ( an extension of what was then known as Kentucky Tech ) off Frey's Hill road and I would drive by the old building every morning...talk about a creepy looking place. You could see the back of it from the school and the little pond that was behind it...this is the stuff horror movies are made of.

I actually grew up down the road from it on Evergreen. Even when it was in use in the early 80's it was still one of the most morose areas I've ever experienced.

There are still more tales of Central State Hospital to be told.

i was in central state in 1966...the old hospital had passage ways underground...left to die were the soul of the very ill.....it was very sad there...

Are there records that list the names of those who died there?