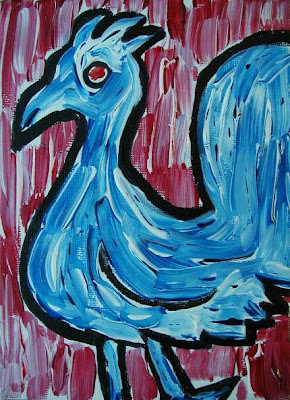 From the Associated Press:

LOUISVILLE, Ky. — Kentucky's slumping horse industry appears on pace to be overtaken by poultry farming as the king of the state's agricultural sector.

In a state where horses are a mainstay of the cultural and economic lifeblood, the new top perch for chickens in the pecking order of Kentucky agriculture once seemed unlikely.

But the equine sector has been battered by deep recession, and the poultry industry has enjoyed years of steady growth. As a result, University of Kentucky agricultural economist Lee Meyer predicted receipts from the poultry sector this year would outpace those from the horse industry by about $180 million.

"I can't imagine a scenario where horses would come back to predominance for three years," he said.

The poultry sector has benefited from strong consumer demand, solid exports and the popularity of chicken products at fast-food restaurants, Meyer said.

"Usually you increase supply, prices come down," he said. "But if demand truly increases from a preference perspective, then you can have higher prices and higher production. And that's what happened."

He predicted that Kentucky equine receipts will reach an estimated $807 million in 2010.

Jones said those figures don't include the considerable tourist dollars generated by the horse industry.

"You don't get those tourism dollars from the chicken industry," he said in an interview. "If you counted all the dollars, I think the horse industry would still be ahead."

Oh, now, don't be so sure that there's no chance for chicken-industry tourism! The World Chicken Festival seems to be doing just fine, thankyouverymuch, and we have Kentucky Fried Chicken headquarted here, plus the Claudia Sanders Dinner House and the original Sanders Cafe.

Think big, people. We can have chicken petting zoos. Zoological museums showing all the many fascinating varieties of chickens. We could hold chicken races. We could also start racing toy chickens instead of toy ducks. Gov. Beshear could pardon chickens randomly on special occasions, much as the President pardons turkeys on Thanksgiving. Oh yeah, and we could even encourage people to eat chicken on Thanksgiving instead of turkeys. We could make the chicken Kentucky's state bird.

We could come up with a cartoon chicken mascot - "Kentucky Clucky", we could call him - and plaster his likeness all over t-shirts, notebooks, stickers, and commemorative limited-edition collector's plates.
Posted by JSH at 11:36 PM

I vote for Clucky! beats that "unbridled spirit" horse...