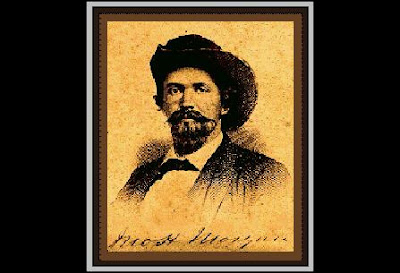 "The Union pickets didn't know what to think of soldiers fighting as naked as jaybirds," Confederate Lt. Bennett H. Young wrote in an unusual report to his superiors about a skirmish between Union and Confederate forces on the Cumberland River in western Kentucky on July 2, 1863.

In late June, Morgan's men scouted the rain-swollen Cumberland River marking the border between Tennessee and Kentucky. The normally placid river was now half a mile wide, choked with floating logs and other storm runoff. Anxious to get his raid on the road, Morgan began crossing his men on July 2 when the river was still overflowing its banks. He had more than 2,500 with him, 1,000 more than his orders authorized.

The impetuous Morgan should have waited for the swirling river to fall, as it was an impediment to keeping his men together, but because of the flood conditions, the Federals on the Kentucky side had relaxed their patrols. The Federals believed no one would try such a dangerous crossing.

It is hard to hide 2,500 men, scores of wagons and hundreds of mules swimming a river. Union patrols discovered the crossing and rushed to the bank to start shooting at the men in the boats that they could see. What they could not see was that hundreds of Confederates had already landed and were now hidden from view by the bank's slope and trees.

Nineteen-year-old Lt. Bennett Young of Morgan's command, who would gain fame the following year for leading a raid on St. Albans, Vt., remembered: "Those who had clothing on rushed ashore into line. Those who swam with horses, unwilling to be laggard, not halting to dress, seized their cartridge boxes and guns and dashed upon the enemy. The strange sight of naked men engaging in combat amazed the enemy."