Voting Rights for the Dead 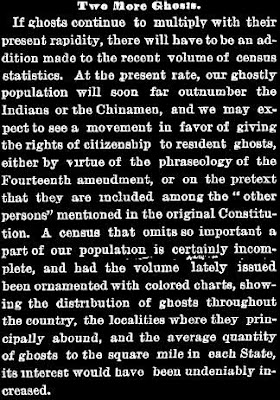 I've always felt that the biggest problem with modern society is that it doesn't take into account its own big picture. To the average American - who knows more about football stats than his own country's history - Millard Fillmore, Thomas Jefferson and Teddy Roosevelt might as well all be the same person or from the same time period. And the Bill of Rights means about as much to them as any other oblique and opaque document they had to study in school but never really understood, like the Magna Carta, the Emancipation Proclamation, or the Smoot-Hawley Act.

Despite the efforts of the ACLU and other organizations to try to hold the original spirit and structure of the U.S. Constitution in place, each generation of Americans is more ignorant than the last when it comes to basic civics. If only there were a way to keep the beliefs of the Founding Fathers alive in the brave new world of today.

Let's give voting rights to the dead.

And we can retroactively give a vote to the Founding Fathers, whose votes should count the largest, since they started this whole thing of ours, thus cancelling out the votes of the lowest common denominators who walk our streets today. (But of course, that doesn't include you, dear reader!)

Much of the atrocities we've seen in our lifetimes would never have been condoned by previous generations. Let's record how they felt and let their voices continue to carry weight today. Of course, there's the inverse problem that most of these older voices of cantakerous dead guys lack a certain progressiveness, and that many of them would not vote for things we take for granted today, like equal rights. This is, of course, why we need to give the biggest votes to the Founding Fathers and those who shared their ideals.

But on many pressing issues of the day, bringing in the dead-folks vote would help bring cohesion and fairness and save us all from an almost certain technocratic hell. Wouldn't you like to be able to vote now on certain things that may take place in the future, like "If, someday, it's proposed that we all have microchips in our asses that monitor our every move, do you support this?" and we can all vote "uh, no, thanks anyway, do not want."

What's more, we may not have to rely on the historical record of any given dead person's stated opinions to determine how they would have voted on modern issues. There's also the option of contacting them via channellers, spiritualists, Ouija boards, divination, what have you, and asking their ghosts directly what they think about, say, Obama's health care plan.

I submit to you an article found in the March 14, 1873 edition of the New York Times, in which an unattributed writer waggishly notes:

If ghosts continue to multiply with their present rapidity, there will have to be an addition made to the recent volume of census statistics. At the present rate, our ghostly population will soon far outnumber the Indians or the Chinamen, and we may expect to see a movement in favor of giving the rights of citizenship to resident ghosts, either by virtue of the phraseology of the fourteenth amendment, or on the pretext that they are included among the "other persons" mentioned in the original Constitution. A census that omits so important a part of our population is certainly incomplete...

The author goes on to illustrate two recent examples of ghostly incidents that had come to his attention; one was a pie-eating ghost in Ulster, and the other was in located in Kentucky. The author is somewhat geographically confused - there's no such thing as Lebanon County - but let's not let that spoil the anecdote: 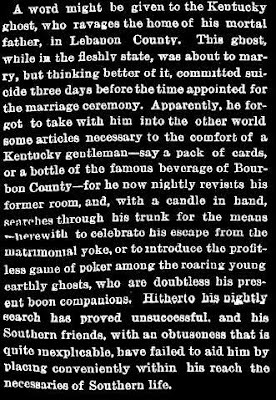 (I especially liked the part about a flask of bourbon and a deck of cards being among the "articles necessary to the comfort of a Kentucky Gentleman", which called to mind my own words about how a good Transylvania Gentleman needs lots of pockets to hold all his swag.)

Of course, we could take the whole retroactive-rights idea even further and give a posthumous vote to each of the dead men and women who populated this hemisphere before the United States. That might be the fairest thing to do, even though it would almost certainly mean that most of us would find ourselves "voted off the island", so to speak.

Let's initiate a grass-roots campaign right now to stop disenfranchising our noble deceased ancestors, and to bring them in on the issues that face us young corporeal whippersnappers. To the polls, you spirits, spooks, and spectres!
Posted by JSH at 12:22 PM

Merry Christmas to you, yours, and all the living and dead folk.