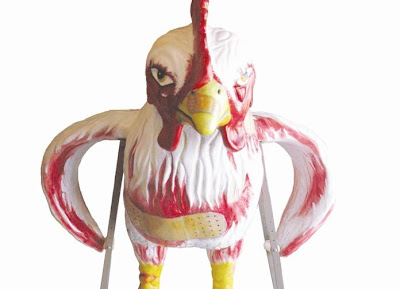 Those anti-carnivore extremists PETA - who criticized President Obama for swatting a fly this year - are launching yet another volley in their neverending campaign against the Louisville-based Kentucky Fried Chicken chain. They've applied for a permit to erect a statue of a cartoon chicken covered in blood and walking on crutches, bearing the words "KFC Cripples Chickens".

Read more about it on my Louisville Mojo column!
Posted by JSH at 12:00 AM