And hey, speaking of obelisks, how about the Jefferson Davis Monument in Fairview, KY? (That's the one in Todd County, by the way - Kentucky has several Fairviews)

Most people, for whom the Washington Monument is their only frame of reference for obelisks, do a double take when they view this for the first time.

The Jefferson Davis Monument is the tallest unreinforced concrete structure in the world - no steel was used to reinforce the concrete. I don't know about you, but that makes me more than a little concerned. Then again, the building has stood up just fine since 1924.

Since all the taller obelisks are constructed of blocks of stone, that also makes the Jefferson Davis Monument the tallest poured-concrete obelisk in the world. 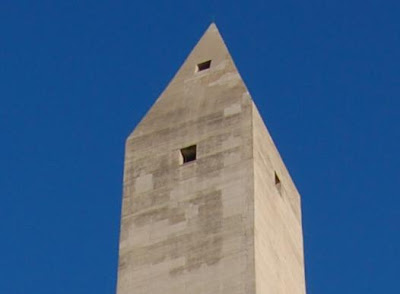 I remember my family and I went on a trip one summer around Kentucky to see all the different monuments and places that make up our vast and unequaled state. The Jefferson Davis Monument was one of these stops.

I recall approaching this structure and my father talking about having two presidents at once. I wasn't listening to anything he said, instead I was more interested in an obelisk.

When we got there, we done tourist things, as I had yet to develop my sense of adventure and my desire to form unique impressions of places I've never seen before. I don't recall there being any souvenier shops, but I do remember catching a frog and losing it in the backseat of the family explorer. We never found that frog until a couple of years ago when I was cleaning out some compartments in the back of the vehicle. It's still there and dry as a bone. I'm saving it just in case I need to boil a special witches brew and don't have time to dry out a frog.

I thought I"d seen it all in my state, but this took me by surprise! Gotta see it....thanks
-Bobby V, Louisville

I use to drive passed it everyday when I worked down that way. I had no idea it was the tallest, not reinforced, concrete structure in the world.