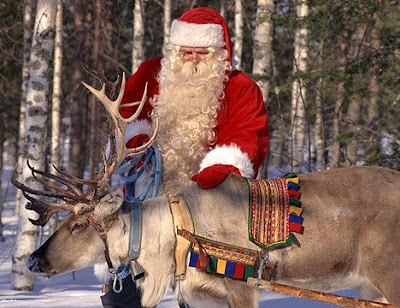 Everyone knows that Santa has nine reindeer: Dasher, Dancer, Prancer, Vixen, Comet, Cupid, Donner, Blitzen and Rudolph. (Well, not counting Egbert, Wilburn, Skippy, Smidgen, Angst, Bunsen, Kriemhild and Bob. But they're only the auxilliary backups in case of emergency.)

But guess what? You're wrong! It's actually Donder, not Donner, according to many scholars who know more about such things than you and I.

You may find this discrepancy to be less than Earth-shattering, but Louisville attorney Donald M. Heavrin has made it his life's calling to spread the word about the real name of this rogue reindeer. He's the commander-in-chief of the Donder Society, an ad hoc group dedicated to correcting the historical record and getting Donder's true name reinstated in popular usage. Each year about this time, the Society releases its annual report, letting the faithful know where we are in the great war against creeping Donnerian hegemony.

So what's the deal here? Well, it's complicated.

"A Visit from Saint Nicholas" made its first print appearance anonymously in New York's Troy Sentinel newspaper in 1823, and it had a reindeer named "Dunder". It was reprinted this way for the next thirteen years, until authorship was claimed by Clement Clarke Moore, a New Yorker of Dutch ancestry and professor of Biblical Studies at New York's General Theological Seminary. Moore published the poem in a book in 1844, and changed Dunder to Donder. 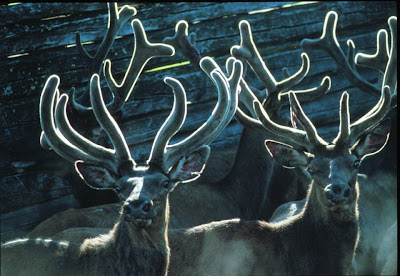 Thunder and lightning would be donder and bliksem in Dutch (transliterated) and donner and blitzen in German. The confusing part is that in naming Santa's two most majestic paranormally-powered Devil Deer "Thunder and Lightning", Moore chose to use one Dutch name and one German one. But hey, he can call 'em whatever he wants, it's his poem.

There's a growing revisionist school of thought that names another New Yorker of Dutch ancestry, Henry Livingston, as the story's true author. In 2000, scholar and textual analyst Donald W. Foster published his findings naming Livingston as the poem's actual source.

According to Snopes, which I regard as accurate only a quarter of the time, there have been many prior examples of Donder rendered as Donner, going as far back as 1906 in an article in the New York Times. However, I checked the online NYT database for 1906 and didn't find the article they speak of. Regardless, these examples are probably either typos or instances where editors well-versed in German thought they were cleverly correcting typos, mistaking Donder for Donner.

The real source of the Donner/Donder glitch was Gene Autry and his 1949 popular song "Rudolph the Red Nosed Reindeer", which said Donner, not Donder, and thus cemented this nomenclature in the public consciousness for the rest of the century. 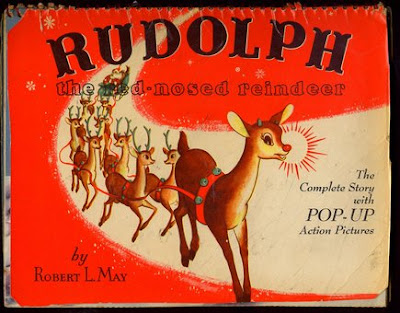 In 1939, a coloring book called "Rudolph the Red-nosed Reindeer" was created by Robert May for the Montgomery Ward department stores. This, in turn, led to Gene Autry's song in 1949. Together, the book and the song introduced this ruminant-come-lately to the Santa mythology, and many regard his presence as being not strictly "in canon".
Posted by JSH at 12:42 AM

Virtual Laurels to you on behalf of Donder proponents everywhere!

I also enjoy raising awareness that only female reindeer retain their antlers in winter. Interesting that Rudolph on the cover of Robert May's book seems to have shed his antlers as males do (an archetype not frequently seen) and is being followed by a bevy of fully-racked lady-reindeer!